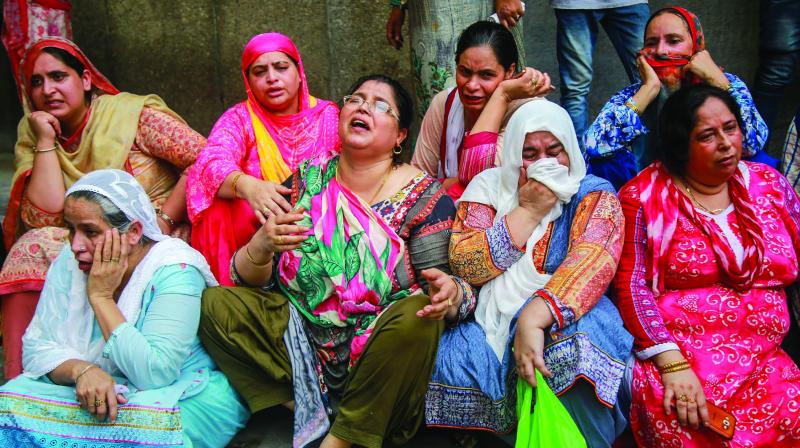 Srinagar: A 25-year-old man was shot dead by security personnel on Saturday as he allegedly tried to forcibly enter former Jammu and Kashmir chief minister Farooq Abdullah’s home at Bhatindi in Jammu.

Syed Murfad Shah, a resident of Chinore locality in the outskirts of Jammu, drove his black XUV into the heavily fortified residence of Mr Abdullah before being shot dead by a sentry of Central Reserve Police Force’s (CRPF) E/38 Battalion, the officials said.

The National Conference on Saturday night sought a probe by National Investigating Agency (NIA) into what it alleged was security breach at the residence of its president Farooq Abdullah at Bhatindi.

“As Dr. Farooq Abdullah is a central government categorized protectee, the Government of India should carry out its independent and impartial inquiry by a team deputed by the Ministry of Home Affairs”, party spokesman Madan Mantoo said in a statement issued in Jammu.

Expressing grave concern over the incident, the party has said the probe must cover all the aspects, including how a car was able to gain entry      into the supposedly high secured residence with minimum cosmetic damage, considering the strength of the main gate. “The security lapse is needed to be probed expeditiously so that the truth must come to fore”, the spokesperson said.

DGP Shesh Paul Vaid said that preliminary investigations have revealed that Shah was suffering from mental illness. “I’m told some medical prescription have been found in the car he was driving which indicates towards his facing some psychological issues. But this is a matter of investigation,” he told this newspaper.

Later when the body was taken to Government Medical College hospital for a post-mortem, about 200 acquaintances of the deceased, originally hailing from Mendhar tehsil of frontier district of Poonch, assembled there. They tried to prevent doctors from performing an autopsy for several hours and asked why an “innocent unarmed person” was killed.

While the post-mortem of the deceased was underway at the hospital, another large group of protesters blocked the main road at Chinore along the Jammu-Bantalab road. The angry crowd burnt tyres and raised slogans against the CRPF and the national TV channels for “misleading reporting”, the witnesses said. Senior police and civil administration officials rushed to the spot to persuade the  protesters to end the blockade.

IG (Jammu range) S.D. Singh Jamwal told reporters that Shah gate-crashed into the house of Mr Abdullah, had a scuffle with CRPF personnel and attempted to snatch a rifle from an officer before he was killed.

He said the youth was alone in the vehicle and unarmed. “We are trying to ascertain how he managed to reach the house without being challenged,” he said.

The officer said that the “intruder” drove his XUV through the gate of Mr Abdullah’s residence around 9.30 am. He added that after entering the premises he caused some damage to the articles over there.

A three-time chief minister, Mr Abdullah is currently the president of NC and a member of Lok  Sabha representing Srinagar constituency. He is provided with the highest “Z Plus” category security. He was not present in his private home at Bhatindi when the incident took place, the officials said.

Soon after the incident took place, his son and NC vice-president Omar Abdullah, who is also a former chief minister, tweeted, “I am aware of the incident that took place at the residence my father & I share in Bhatindi, Jammu. Details are sketchy at the moment. Initial reports suggest an intruder was able to gain entry through the front door & in to the upper lobby of the house.”

In another tweet, he said, “Further details are awaited as the security personnel carry out the anti-sabotage checks & ascertain the background of the person who was able to force his way in to the house.”

Pertinently, in 2009 on similar lines forces shot dead a deaf and dumb man outside the then Cm Omar Abdullah’s residen-ce along Srinagar’s high-security Gupkar Road.