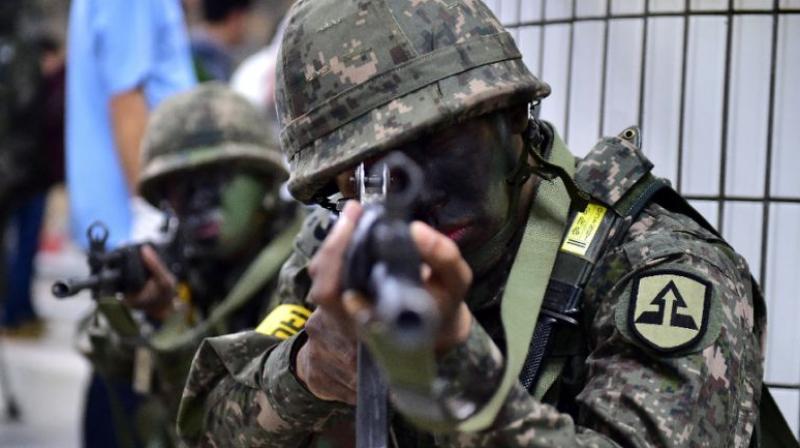 Additional 100 companies of the Central Armed Police Forces were deployed in Jammu and Kashmir for counter-insurgency operations and to maintain law and order. (Representational Image)

Mumbai: The Centre’s move to scrap Article 370 germinated nine days ago when the government first deployed the Central Reserve Police Force in the Valley.

According to NDTV report, senior officials in the Valley knew about the decision and were certain of the official announcement on Monday.

Read | With the removal of Article 370, what has Jammu and Kashmir lost?

Senior officials said the steps on the ground were "unprecedented" and that such measures "have never been taken since 1971”.

July 27 (Saturday): Additional 100 companies of the Central Armed Police Forces were deployed in Jammu and Kashmir for counter-insurgency operations and to maintain law and order.

Of the 100 companies, 50 were from the Central Reserve Police Force (CRPF), 10 from the Border Security Force (BSF), 30 from the Sashastra Seema Bal (SSB) and 10 from the Indo-Tibetan Border Police (ITBP), according to the letter.

July 28 (Sunday): Speculation begin to circulate in the Valley about a possible abrogation of Article 370.

Peoples Democratic Party (PDP) president Mehbooba Mufti warned the central government that any attempt to tinker with the special status of Jammu and Kashmir would blow up in its face.

Read | Whoever tries to mend Article 35A will be burnt to ashes: Mehbooba Mufti warns Centre

July 30 (Tuesday): Jammu and Kashmir Governor Satya Pal Malik asked people not to pay any heed to rumours on the special status of the state.

July 31 (Wednesday): Former chief minister Mehbooba Mufti launched an awareness campaign regarding the Constitution’s Article 35A. Addressing a press conference in Srinagar, Ram Madhav said the BJP will take a decision which will be in the interest of the people.

August 1 (Thursday): A National Conference (NC) delegation, led by party president Farooq Abdullah, met Prime Minister Narendra Modi in Delhi and apprised him of the current situation in the state. Over 280 more companies of security forces were deployed in the Kashmir valley.

August 2 (Friday): The Amarnath yatra ended 14 days ahead of its scheduled close on August 15. There was a joint press conference of the Indian Army, CRPF officials and Jammu and Kashmir police on the confirmed intels about Pakistan planning to attack the Amarnath Yatra route.

The state government issued an advisory for all pilgrims and tourists to leave the Valley as early as possible.

August 3 (Saturday): The Army said it repelled an attempt by a mixed group of Pakistani soldiers and terrorists to attack an Army post along the Line of Control (LoC), inflicting heavy casualties.

National Conference leader and former CM Omar Abdullah met Governor Malik on Saturday and urged the central government to clear the air about what was going on in the Valley.

August 4 (Sunday): Union Home Minister Amit Shah met senior officials in New Delhi on the Jammu and Kashmir situation. Those who attended the meeting included the National Security Advisor Ajit Doval and Union home secretary Rajiv Gauba, among others. In Kashmir, an all-party meeting was held at the residence of Farooq Abdullah.

The decision was taken to suspend the mobile broadband services. By 11 pm, mobile services were gone in most of Srinagar. By 4 am, landlines were not functioning in several parts of Srinagar.

The goal was very clear -- control the flow of information, prevent rumours to ensure there was no violent reaction.

August 5 (Monday): Prime Minister Narendra Modi held Cabinet meeting over the Jammu and Kashmir. After the meeting, Union Home Minister Amit Shah addressed the Rajya Sabha where he announced that the Modi government would scrap Article 370.

There was no debate or any kind of discussion before scraping the Article 370.