Among them were students of Srinagar’s NIT, who had reached the winter capital in a fleet of State Road Transport Corporation buses. 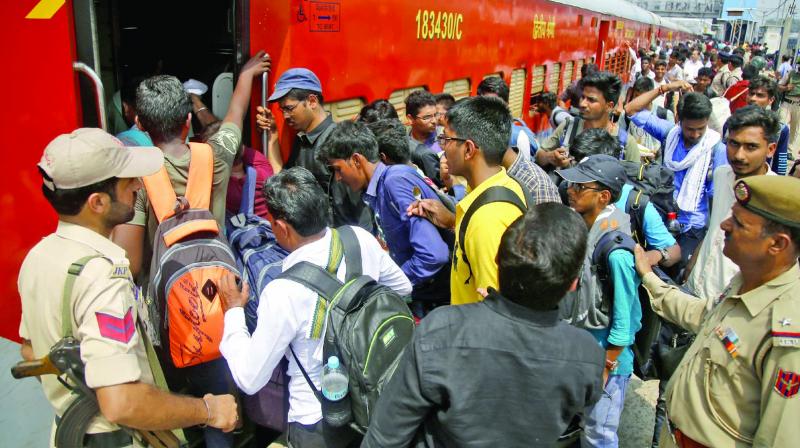 A security person stands guard as students board a special train arranged to take them back to Hyderabad at Jammu Tawi railway station on Sunday. (Photo: PTI)

Srinagar: While tourists, Amarnath pilgrims and students are fleeing the Kashmir Valley after the authorities issued a security alert, over 100 sportsmen, including former cricket all-rounder Irfan Pathan, took flights and buses from Srinagar to return home on Sunday.

Pathan, the “mentor” of Jammu and Kashmir’s state teams, was in Srinagar to oversee the trials for the U-16 (Vijay Merchant Trophy) and U-19 (Cooch Behar Trophy) and prune the list of probables. He along with the age-group aspirants left for their respective homes after officials of the J&K Cricket Association announced postponement of the remaining trials in the state’s summer capital in view of “prevailing security situation” in the Valley.

The J&K home department on Friday asked Amarnath pilgrims and tourists to curtail their stay in the Valley “in view the latest intelligence inputs of terror threats with specific targeting of the Amarnath yatra, given the prevailing security situation in the Valley”.

The advisory set off panic among thousands of holidaymakers and pilgrims, who quickly started leaving the Valley in whatever transport was available to them. Also, non-local students of Srinagar’s National Institute of Technology (NIT) and other institutions have left the Valley in the past two days. Some decided to return home on their own but in most cases the students were advised by the authorities to leave. They also facilitated their journey back home.

Over 500 non-Kashmiri students doing professional studies in different colleges of the Valley had reached Jammu by Saturday evening and have since left for their respective states by train from Jammu Tawi. Among them were students of Srinagar’s NIT, who had reached the winter capital in a fleet of State Road Transport Corporation buses.

Amid heightening tensions, even many students from different parts of the Kashmir Valley putting up in hostels of the University of Kashmir in Srinagar and Islamic University of Science and Technology (IUST) at Awantipora in Pulwama district have left for their homes after being evacuated by the authorities, or they have decided to leave on their own.

A report from the highway town of Banihal in Jammu region said groups of Ladakh-bound bikers were on Sunday not allowed to proceed towards the Valley by the police. The riders had to return from the Jawahar Tunnel after they were denied entry into the Valley by the police deployed there. Many riders changed their route and decided to head towards Ladakh via the Bhaderwah-Padri area of Doda district, passing via the Chamba area of Himachal Pradesh.

The Centre’s rushing thousands of additional troops to J&K and a series of contingency orders issued by the local authorities in the past one week have caused chaos and confusion in the Kashmir Valley. The local populace has been seized by a frenzy of panic and fear and in the past three days, marketplaces were flooded by panic buyers. Besides food, residents have hoarded gasoline and other essentials, while most ATMs in Srinagar and other major towns of the Valley have run out of cash as people also went for panic withdrawals in anticipation of prolonged curfews and violence.