The statement said that the condition of the two patients is 'critical but stable'. 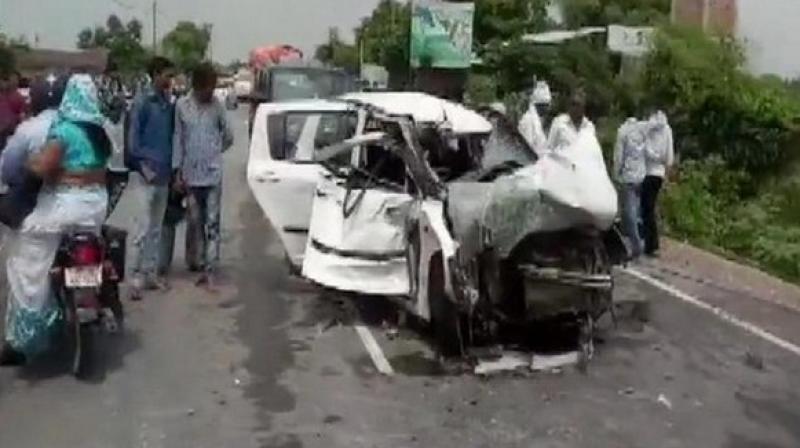 A truck had rammed into the vehicle in which the girl, her counsel and two aunts were travelling to Raebareli. (Photo: ANI)

Lucknow: The health condition of the Unnao rape survivor who was grievously injured in a road accident is improving, according to King George's Medical University (KGMU) where she is currently undergoing treatment.

However, there is no improvement in the condition of her lawyer Mahendra Singh, who is still in a deep coma.

"There is an improvement in the condition of the female patient. She is following commands and opening her eyes. Her fever is also subsiding. Preparations to take her off the ventilator are underway," KGMU said in a statement.

"However, we still have to medicate her to maintain her blood pressure," it said.

The Unnao rape survivor and her lawyer are being treated at King George's Medical University in Lucknow after they sustained grievous injuries in an accident on July 28.

The statement said that the condition of the two patients is "critical but stable".

"The male patient is breathing properly without the help of the ventilator but there is no improvement in his condition. He is in a deep coma," the statement added.

A truck had rammed into the vehicle in which the girl, her counsel and two aunts were travelling to Raebareli. While she and her lawyer sustained grievous injuries, both her aunts died on the spot.

The Uttar Pradesh Police has filed a case of murder against rape accused and legislator Kuldeep Singh Sengar and nine others in connection with the accident.