Over 30 members were in the Well shouting slogans against the revocation of Article 370. 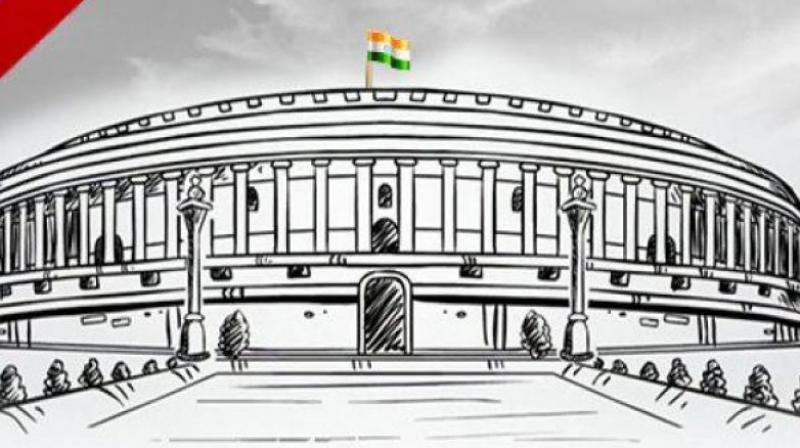 Members from the Congress, DMK, National Conference and RSP were in the Well, shouting slogans and demanding a reply from the government on the Kashmir situation. (Photo: ANI)

New Delhi: Opposition parties on Monday created ruckus in Lok Sabha as they raised concerns about the Kashmir situation even as the House continued to transact business.

Members from the Congress, DMK, National Conference and RSP were in the Well, shouting slogans and demanding a reply from the government on the Kashmir situation.

Amid the din, the Supreme Court (Number of Judges) Amendment Bill and The Chit Funds (Amendment) Bill were introduced.

Besides, the House took up a discussion on The Transgender Persons (Protection of Rights) Bill.

Opposition members continued with their sloganeering for more than an hour in the Lower House.

Over 30 members were in the Well. Some of them were heard shouting slogans such as 'We want justice' and 'Don't divide Kashmir'.

As the noisy scenes continued, UPA Chairperson and Congress leader Sonia Gandhi was seen discussing some issue with party members, including Shashi Tharoor, and with DMK's TR Baalu and Kanimozhi.

Later, Congress leaders Rahul Gandhi, Manish Tewari, Tharoor and Roy were seen closely going through a bill and also referring to a book. It could not be immediately ascertained which bill they were discussing about.

Samajwadi Party patriarch Mulayam Singh Yadav wanted to talk amid the din but was not given an opportunity.

Read: With the removal of Article 370, what has Jammu and Kashmir lost?

When TMC's Satabdi Roy was speaking on the bill related to transgender persons, Congress members -- Hibi Eden and T N Prathapan -- came near Roy's seat and began shouting slogans standing in the aisle.

TMC leader Kalyan Banerjee protested and after a brief exchange between him and some Congress members, Eden and Prathapan went back.

At one point of time, some members standing in the Well were seen clapping.