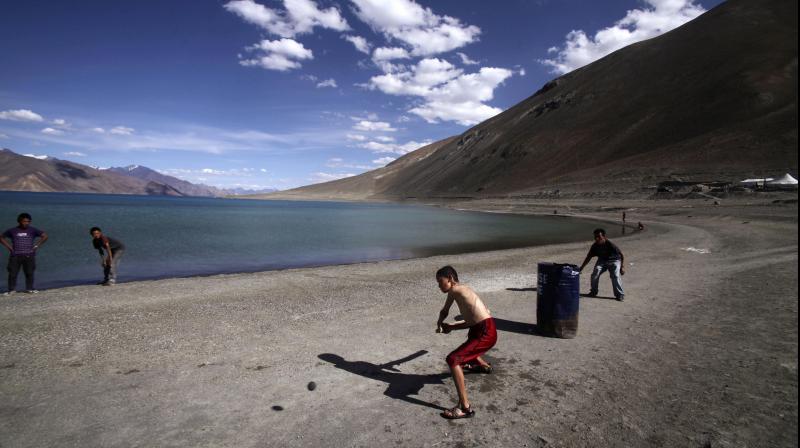 In this file photo, children play cricket by the Pangong Lake, near the India-China border in Ladakh, India

The fifth Corps Commanders level talks between India and China on Sunday seems to have been unable to achieve any major breakthrough on further disengagement in Pangong Tso and other friction areas.

Though government is yet to come out with any formal statement on the meeting, indications are that China has shown reluctance to move out of the finger areas in the Pangong Tso. China is reported to have claimed that it had always been present in the finger area.

There have been series of meetings of India's top security brass at various levels in national capital to discuss the outcome of the fifth Corps Commanders level talks and the further way out. There are chances that India may now try high level of diplomatic contacts to try to resolve the military stand-off which has now entered the fourth month.

Chinese are occupying finger 5 area in the Pangong Tso and are still continuing to hold the ridges in the finger 4 area. During the initial phase of disengagement, Chinese troops had vacated the banks of Pangong Tso lake in finger 4 area on July 9 and gone back to finger 5. But Chinese troops still have to vacate area between finger 5 and finger 8, which India claims is its territory. Satellite images have shown huge build-up by Chinese at Pangong Tso including the building of permanent bunkers, huts, installation of artillery guns and stationing of boats. These indicate the Chinese are preparing themselves for a long haul in the area.

In May 2020, Chinese troops in an aggressive move occupied the area between Finger 4 to Finger 8 and prevented Indian troops from patrolling. In the Hot Springs general area, Chinese troops have reportedly not moved back to that extent in the first phase as was agreed in the agreement of June 6 and has still some presence. Galwan Valley is the only friction point where Chines have completely disengaged as per the agreement as there is around 4 kilometer distance between the two armies.

The Army is now preparing for the stand-off with China to continue for a long period and has started to outline stocks and materials needed for winter deployment of the troops at such a high altitude. It is in the process of placing orders for additional tents and shelters from indigenous as well as foreign vendors for winters.

China has brought a large number of troops estimated to be around 40,000 soldiers in the front and depth areas at the LAC in the Ladakh sector where they have also amassed tanks, artillery, aircraft and radars, jammers. India has also done mirror deployment of its troops in Ladakh to counter the Chinese. India has also deployed tanks, heavy artillery and air defence system in the Ladakh sector to counter any Chinese challenge.