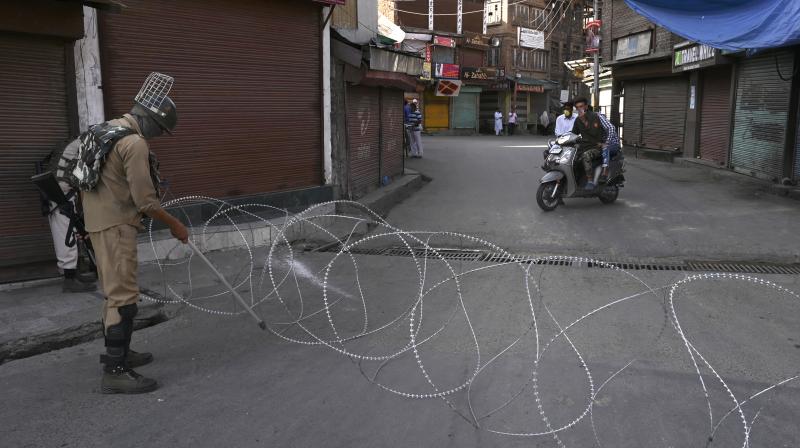 As tensions run high, large contingents of policemen have been deployed at the residences of various political leaders. — HU Naqash photo

The local police and Central armed police forces on Tuesday imposed a curfew in Jammu and Kashmir’s summer capital Srinagar whereas strict security restrictions are in force elsewhere in the Kashmir Valley, a day before the first anniversary of the abrogation of Article 370 and bifurcation of the state.

The security in the remaining parts of J&K including winter capital Jammu has been beefed up further, reports received here said.

As tensions run high, large contingents of policemen have been deployed at the residences of various political leaders belonging to both mainstream and separatist camps to thwart possible attempts by them to organize protests. The police also took several political activists into preventive custody.

Among them is PDP’s Rouf Bhat who had announced at a press conference here on Monday that the party will observe August 5 as “black day” and that a protest demonstration will be held in Srinagar to mark the anniversary of the “unconstitutional measures” taken on this day last year.

The authorities said that Srinagar will remain under curfew also on Wednesday. Srinagar’s DC Shahid Iqbal Choudhary had claimed on Monday that concerned SSP has reported that a series of inputs received by the police suggest that separatists and Pakistan sponsored groups are planning to observe August 5 as a ‘black day’ and, therefore, there is apprehension of “violent actions and protests” which could “endanger public life and property.”

He said that such an activity could also defeat the purpose of imposing lockdown to stem the spread of Coronavirus and, therefore, it was decided to clamp curfew and strict security restrictions in the entire district with immediate effect.

Mike-fitted police vans went round the City on Monday night itself announcing imposition of curfew and warning of “strict action under law” against those found violating the orders. At dawn on Tuesday, police and paramilitary reinforcements were fanned across the summer capital and its neighbourhood to lay razor-wire and steel barricades on main roads.

Kashmiri politicians have in their statements reiterated that the Centre stripped J&K of its special status and split it up into two Union Territories arbitrarily and against the wishes of its people a year ago. People’s Conference (PC) chairman and former minister and BJP ally, Sajad Gani Lone, tweeted, “The robber and the robbed. The phoniness. The feigned triumphalism. A day not so far. The robber will take the knee. The robber will come back to return to the robbed what the robber robbed. The robbed will refuse to take what was robbed”.

The PC in a statement earlier reiterated that the decisions taken on and after August 5 last year are not acceptable to the people of J&K as these decisions have been thrust on the people and lack any acceptance or legitimacy amongst the masses.

“We believe, for us, August 5, 2019, is a negative milestone. This will be remembered as a sad day, a day of disempowerment a day of the attack on our identity,” it said. The party added, “It was a spiteful move and the most unfortunate aspect of it was that an unsuspecting population across the country fed on a diet of hatred and intoxicated on jingoism actually endorsed this spiteful move against the people of Kashmir. We want to tell people not to despair. Nothing is permanent in politics”.

He asserted the move made by the government on August last year has been “a death blow at the very root of the State’s constitutional relationship with the Union and a blow to the collective psyche of the Kashmiris, robbing them of their sense of identity and dignity”.

Meanwhile, in Kargil, a local socio-religious group called Anjuman-e-Sahab Zaman appealed the people to observe a complete shutdown on Wednesday to mark the first anniversary of the abrogation of Article 370 and bifurcation of the J&K as a  ‘black-day’. Kargil is now part of Ladakh Union Territory.