Probe agency interrogated Kharge for nearly seven hours and he left the Herald House at around 8.30 in the evening 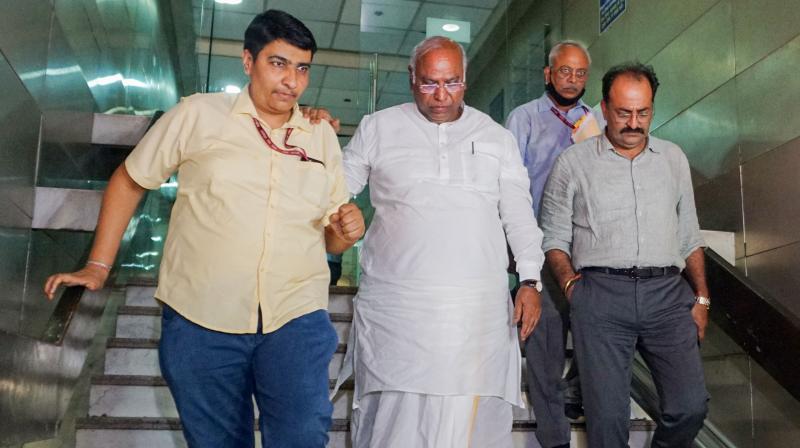 NEW DELHI: The Enforcement Directorate (ED) on Thursday resumed its searches at the office of the Young Indian, the holding company of the Congress-owned newspaper National Herald, after senior party leader Mallikarjun Kharge appeared before the agency officials at the Herald House building in New Delhi.

Mr Kharge, who is also the Leader of the Opposition in the Rajya Sabha, reached the National Herald building at Bahadur Shah Zafar Marg at about 12:45 pm and met the ED officials. It is learnt that the probe agency interrogated Mr Kharge for nearly seven hours and he left the Herald House at around 8.30 in the evening.

The federal agency had issued a summons to Mr Kharge for his presence during the raids at YI's office in his capacity as the principal officer of the company.

Launching a scathing attack on the Prime Minister, former Congress president Rahul Gandhi said he was "not afraid of Narendra Modi" and will not be "intimidated" by the ED’s action in the matter.

Mr Gandhi termed these actions an "attempt at intimidation". "We will not be intimidated. We are not afraid of Narendra Modi," he told reporters outside Parliament. "They may do whatever they want. It does not matter."

"But we will not be silenced," Mr Gandhi said. "What Narendra Modi and Amit Shah are doing in this country and against democracy, we will stand against it whatever they may do. It does not matter," he added.

The Central financial probe agency had on Wednesday temporarily sealed the single-room office of the YI, located on the ground floor of the four-storied Herald House building, to "preserve evidence" as it could not search it during the last two days because it was locked and the authorised representatives were not available.

The ED’s move came in connection with the National Herald money laundering case and the searches were carried out under the criminal sections of the Prevention of Money Laundering Act to gather additional evidence with regard to the trail of funds.

A senior ED officer said that the searches at YI's office, which were on hold, were being carried out to gather any possible evidence in connection with the money laundering matter.

The federal agency on Tuesday had launched raids at a dozen locations, including at the Herald House, as part of its ongoing money-laundering probe into the National Herald-AJL-Young Indian deal and the probing team continued its searches till the early hours of Wednesday after they collected some documents, digital data and questioned some staffers too.

The National Herald newspaper is published by Associated Journals Ltd (AJL) and the Young Indian is the holding company. The newspaper office is registered in the name of AJL.