At least 12 people have been rescued by NDRF and SDRF teams. 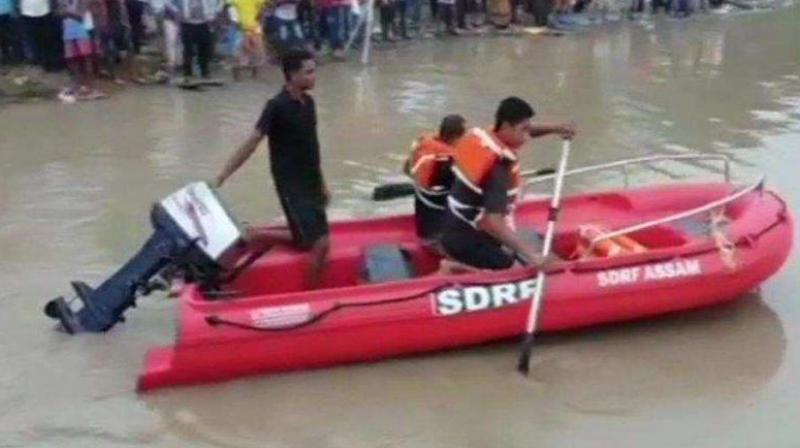 The mishap took place around 1:30 pm when the boat developed a technical snag and subsequently collided with a pillar of an ongoing water supply project in the Brahmaputra. (Photo: Twitter | ANI)

Guwahati: In a tragic incident, at least 20 people are feared drowned in the Brahmaputra river after a country boat carrying 40 passengers capsized near the Aswaklanta temple near Fancy Bazar of Guwahati.

The mishap took place around 1:30 pm when the boat popularly known as Bhutbhuti, developed a technical snag and subsequently collided with a pillar of an ongoing water supply project in the Brahmaputra.

The boat was moving towards Majbat, Madhayamkhanda in North Guwahati from Fancy Bazar ghat in the city.

The NDRF and SDRF launched a massive search operation to rescue those missing. They recovered at least two bodies besides rescuing at least 12 passengers who were on the boat.

Pointing out that one of the two dead bodies is yet to be identified, the police said that the girl has been identified as Ankita Barua. 17-year-old Ankita, a resident of Silasako village in North Guwahati, is a student of Cotton University.

Assam Chief Minister Sarbananda Sonowal has ordered a high-level probe by an additional chief secretary Jishnu Baruah into the incident.

SDRF officials said that the country-made ferry boat accidentally hit the ongoing construction site pillars, which led to the tragic accident and capsizing of the boat.

The Brahmaputra is in spate due to monsoon rains in the upper reaches of Arunachal Pradesh.

Eyewitnesses said that they saw several passengers from the ferry trying to swim to the shore. The country-boat, which was loaded with passenger, was also carrying a motorcycle.

Some of the survivors claimed that neither the driver of the boat was trained nor the boat had any life-jacket.