The NRC updation process has been questioned by human rights activ-ists who claim that Bengali Muslims have been deliberately targeted and excluded. 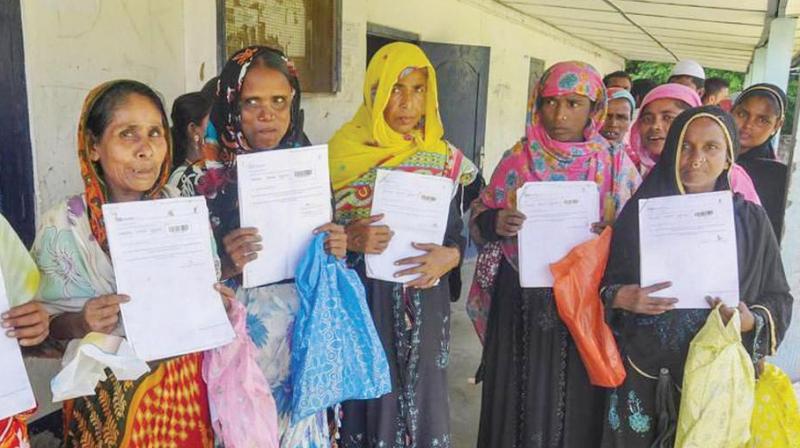 Women queue up to verify their names in the final draft of the National Register of Citizens at Morigoan. (Photo: PTI)

The exclusion of four million people from the NRC draft list that was recently released by the government of Assam has led to myriad reactions from different stakeholders. It has unlea-shed a wave of outrage and fear amongst people whose names have been left out. The authenticity of the NRC updation pro-cess has also been questioned by human rights activists who claim that Bengali Muslims have been deliberately targeted and excluded. Members of the Opposition parties have cried foul and decla-red this as a political stratagem to advance the BJP’s communal agenda and enable the consolidation of a united Hindu vote bank in the state. This allegation has gained further legitimacy owing to the parallel efforts of the BJP government at the Centre to push the Citizenship Amendment Bill that seeks to confer citizenship on Hindu refugees. On the other hand the ‘indigenous’ Assamese claim that the NRC has been a fair and a much needed proc-ess that will hopefully and finally lead to the expulsion of illegal Banglade-shis.

What remains under analysed however is the ways in which the Assam movement which was essentially based on language has now converged with the Hindutva rhetoric of building a strong Hindu Rashtra.

The genesis of the NRC updation process is traced to the Assam Accord when the Rajiv Gandhi led Cong-ress government signed a Memorandum of Settlem-ent with the All Assam Students’ Union (AASU) and the All Assam Gana Sangram Parishad in Au-gust 1985. The Accord was an immediate outcome of the ‘bideshi kheda’ agitation, led by AASU, to detect and deport foreigners from the state. The genesis of the Assam movement however, may be traced to the ‘Bongal Kheda’ (oust the Bengali) movement which started in the 1960s under the aegis of the Assamese youth with the full support of the state government. The sentiment was well captured in the slogan ‘Assam for Assamese’. Interestingly though, des-pite the presence of a sizeable number of Bengali Muslims in the state, the primary target was not the latter but Hindu Bengalis who were perceived to be the real ‘outsiders’. The Bengali Muslims who were mostly peasants and economically vulnerable were accepted as ‘Na Asamiya’ (neo Assamese) as they were perceived to have ‘assimilated’ satisfactorily into the Assamese way of life. Thus, during the language riots of the 1960s, Hindu Bengalis in the Brahmaputra valley were brutally attacked and killed, their houses burnt and their shops looted. Several Bengalis officers working in tea gardens, oil industries and other government services were assaulted. Thousands of Bengali students studying in medical colleges were forced to flee from their hostels overnight.

In later years ‘Bongal Kheda’ became a metapho-r for growing intolerance against other ‘outsiders’ such as the Nepalis, Bihar-is and Marwaris, notwithstanding the fact that they had been living in the region since several decad-es. Following the Bangla-desh War in 1971, around 10 million refugees fled the country and a large section of them settled in Assam. According to several accounts, this influx continued even after 1971 due to paucity of land and employment in Banglad-esh. Popular dissent agai-nst this growing influx eventually erupted in the Assam movement in the late 1970s. Even though language remained the key driver of this agitation and Bengali Hindus were targeted this time too, the principal focus now was on the ‘Banglad-eshi Muslim’. The killing of thousands of Bengali Muslims in Nellie, in 1983, eventually ended the bonhomie between the former and the Assamese Hindus in the state.

Assamese xenophobia centered on the ‘Bengali’ has provided a great entry point for the Sangh Parivar to grind its axe in this region, albeit with a difference. One of the most important reasons for the BJP’s electoral success in Assam in the 2016 assembly elections was that over a period of a few decades, the Sangh Parivar had managed to twist the age old Assamese-Bengali cle-avage into a Hindu-Mus-lim cleavage.  Through the concerted efforts of the various affiliates of the Parivar, the Hindutva brigade has persistently drawn attention to the ‘internal security’ and threat of the ‘extinction of Assamese identity’ due to alleged massive illegal immigration from Bangla-desh. Despite their overlapping agenda with the AASU and AGP, the BJP has always made a clear distinction between ‘Hin-du refugees’ and ‘Bangla-deshi infiltrators’, and advocated for the granting of legal citizenship to the former category.

In this context, the twin processes of the initiative of the NRC updation and the proposal of the Citiz-enship Amendment Bill are nothing short of a political masterstroke on the part of the BJP to join-tly appease both the Assa-mese and the Bengali communities in Assam. While both these linguistic communities have grievances with regard to one of these processes, for the BJP it is a clear win-win situation.

If at all, and the possibility of which is quite high, the overwhelming majority of the four million people who have been excluded from the NRC list turn out to be Bengali Muslim, the BJP’s advocacy for the amendment to the Citize-nship Act would acquire immediate traction from both the Hindu Assamese and the Hindu Bengalis for fear of being endangered by the ‘Muslim’.   This in turn may eventually lead to the impossible; the forging of a Hindu unity of the Assamese and the Bengalis.

Analysts have argued for long that the grand narrative of Hindu Muslim animosity does not work in Assam in the ways in whi-ch it manifests in other Indian states. If the recent developments in Assam are anything to go by, this conviction may soon be shaken. What is increasingly becoming clear is that despite the vehement claims of the AASU and AGP that unlike the BJP-RSS, their fight has been and will continue to be about ‘legal citizenship’ for the persecuted Bengali Muslim today, there is no difference between the two. This is perhaps the biggest price that Assamese chauvinism has had to pay.

The writer is an assistant professor at Azim Premji University