Sources indicated that China Army did patrol the general border area in August. 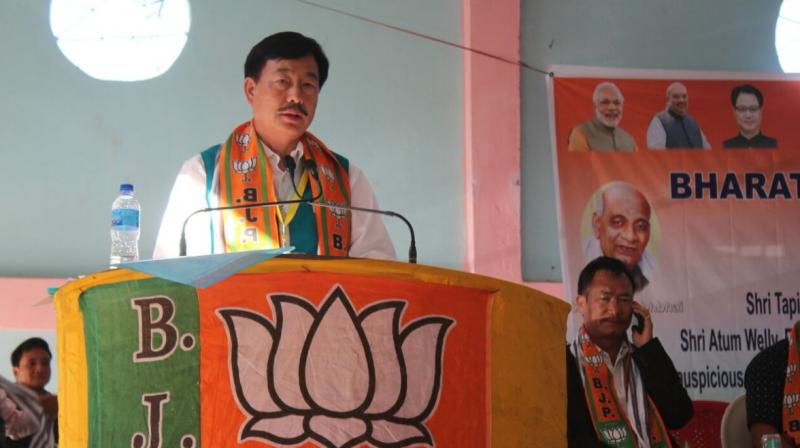 New Delhi: Chinese Army made transgression in the Chaglagam area (military calls it Fish Tail) of Arunachal Pradesh in August and made a wooden makeshift bridge over a stream, said BJP’s Lok Sabha member from Arunachal (East) Tapir Gao on Wednesday.

However, sources in the security establishment said that armies from both side patrol in the area as the border there has not been demarcated. “This is not intrusion as border here is not demarcated between India and China. Armies from both sides patrol the area,” said sources.

“There is no permanent presence of the Chinese Army in the area. It is under surveillance and our patrols are going there,” said sources. Sources indicated that China Army did patrol the general border area in August.

They, however, dismissed the claim that the Chinese  troops entered 100 kilometres in the Indian territory.

“After Wuhan summit in 2018 between Prime Minister Narendra Modi and Chinese President Xi Jinping, there has been an understanding between both the armies that they will not patrol the area at the same time. This is to avoid a face-off between the soldiers of the two countries. So, both sides know timing of each others patrol,” said sources. As the terrain is difficult, it takes a patrol party of Indian Army 8-10 days to cover the area on foot.

Mr Gao had also posted a picture of the wooden bridge on the social media — which he claimed was taken by a party worker — allegedly constructed by Chinese Army on a stream on the social media platform. But later on, he deleted the picture.  “It is difficult to identify a particular bridge from the photograph and who constructed it, as armies from both sides while on patrol duty build many such makeshift bridges on local streams. Even civilians do so. We are sending a patrolling party to identify it,” said sources.

Indian Army in a statement said that  there is differing perception of the alignment of the LAC, as in many other areas. “The terrain is thickly vegetated and all movements are undertaken on foot along Nalas and streams. During monsoons, whenever the Nalas are in spates, temporary bridges are constructed by the patrols for their movement,” it said.

The statement said that being an area of differing claims, troops routinely from either side patrol the area. In addition, civilian hunters and herb collectors also frequent here during summer months.

“It is reiterated that there is no permanent presence of either Chinese soldiers or civilians in the area and surveillance is maintained by our troops,” it said.

The statement said that India and China have well established diplomatic and military mechanisms to address all issues in our border areas. It said that two sides agree that maintenance of peace and tranquillity in all areas of India-China border areas as a prerequisite to smooth development of overall bilateral relations. “Both countries have also agreed to work towards a fair reasonable and mutually acceptable settlement of the boundary question on the basis of 2005 Agreement on Political Parameters and Guiding Principles,” it added.