The Central government’s pan-India flagship project for adolescents has been a slow starter, though launched with fanfare in 2014. 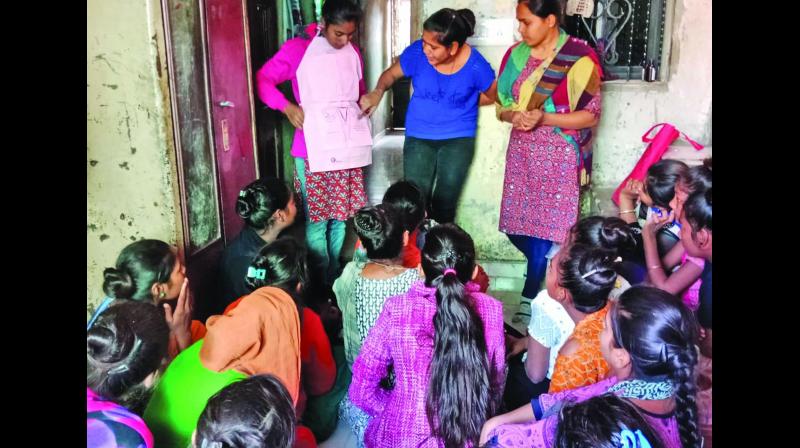 An apron with the female reproductive organ

Working with adolescents under the RKSK (Rashtriya Kishor Swasthiya Karyakram) in Sabarkantha district of Gujarat, doctors who were handling sexual reproductive health as well as mental health issues became lifesavers for three young girls. All three were still in school. While one girl had a collapsed uterus, another had no ovaries and a third, who was listless and breathing heavy, had a heart problem. There was a problem with one of the valves of her heart, but till she came in for RKSK counselling in school, she had been visiting quacks. Three years after identification of the heart ailment, the valve was replaced and the girl is growing into a healthy adult. The other two girls too were referred to gynaecologists.

While the three cases are rare and don’t fall in the normal category of RKSK interventions, in the 942 schools of Sabarkantha district where it is being implemented, 92,000 young adolescents are more assured about their bodily changes and are learning to control their anger and cope with the stress of exams, differences at home and with peers. There is a new awareness on eating healthy and menstrual hygiene management. In fact Sabarkantha is the best performing district under the RKSK in Gujarat.

The journey, however, has not been easy. The Central government’s  pan-India flagship project for adolescents has been a slow starter, though launched with fanfare in 2014. With a fifth of the population being adolescents in the 10 to 19 age group, it was important to bring them into the mainstream of development, focusing on six specific components — their nutritional needs, sexual reproductive health, mental health, the growing phenomenon of substance abuse, gender based violence and non-communicable diseases. Investing in adolescents to get young healthy adults was the cornerstone of the programme. However, there were inherent problems in getting peer educators and people with counselling and communication skills.

If Sabarkantha has been an exception in performance, it is thanks to a dynamic chief district medical officer, Dr Manish Fancy, and his ability to push as well as put together a team of dedicated doctors (both Ayush and MBBS) and teachers. It was during a conference in Delhi for a malnutrition free India by 2022 that it was decided to give a new push to the adolescents programme. There was careful strategising and in Sabarkantha from 2017, implementation of the RKSK began in earnest in phases with funding from UNICEF, training by the NGO Chetna and valuable inputs from the Indian Institute for Public Health: Gujarat, the Odisha RKSK consultant, the MP government, which runs one of the best RKSK projects of the country, the education department and women and child development Department.

REACHING OUT TO ADOLESCENTS IN SCHOOLS
Sabarkantha based the programme in schools since school enrolment is high in the state. In the first phase the focus was on nutrition and reproductive and sexual health; in the second it was on mental health and substance abuse and in the third on gender-based violence (GBV) and non-communicable diseases (NCDs).

Teachers and doctors too were trained for greater, informed participation in RKSK — 215 teachers received training on mental health and 352 on menstrual health management. Sanitary napkins are available in 21 schools — a pack of 15 for a month costing `30. In schools with over 300 girls, electric incinerators are provided to dispose the used napkins. Every week the Ayush and MBBS doctors have two sessions each in schools on mental health. The 10 to 15 per cent students who were into substance abuse, largely gutka and tobacco-based edibles, were counselled. 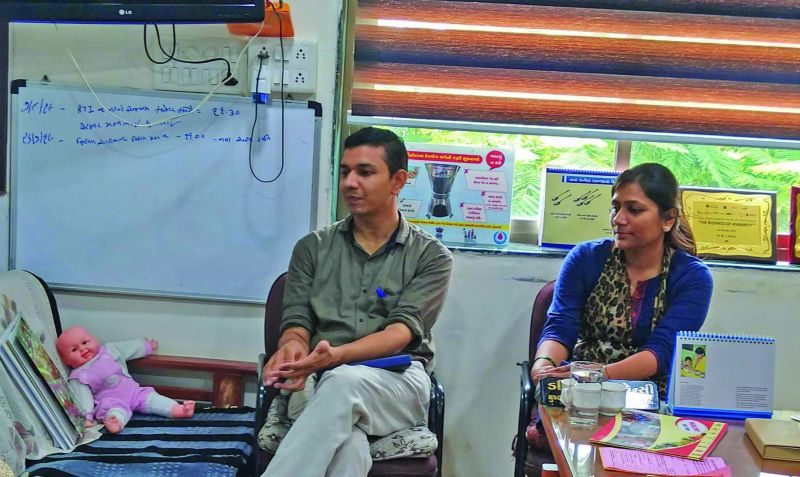 Dr Rama, an Ayush doctor, and Dr Hitesh Prajapati, an MBBS doctor, said they first build rapport with students through fun, games and discussion. With suicides on the increase there is dialogue on anger management and stress busting. What causes anger in adolescents? It varies from getting poor marks in exams to not being allowed to see a serial of their choice or not getting food they relish. There is stress, disappointment when a best friend ditches you. There are also more sensitive issues of how to deal with a situation where a girl is slapped by a boy or vice versa. “We are enjoying working with students,” says Dr Prajapati. “It is helping us de-stress ourselves and hopefully we will become better parents.” Health and education departments have converged well. While the teachers lead the programme, doctors work with teachers on reproductive sexual health issues, simplifying words like fertilisation and menstruation.

A NUTRITIOUS FOOD PLATE IN NATIONAL COLOURS
Each phase begins with training at the nodal agency — Chetna. The work on the first two phases in 2017-2018 and 2018-2019 is coming to an end. Chetna, with 38 years of working at the grassroots with women and girls’ health and nutrition, understands rural diets and food taboos. Director Pallavi Patel recalls pregnant women’s fears that if they ate too much the baby would get suffocated in the womb; if they ate brinjals, the baby would be dark skinned and white coloured food would cause difficult labour. These beliefs led to food restrictions and nutrition deficiencies. Anaemia is high in Gujarat among women and adolescents. So Chetna introduced a nutritious plate with food arranged in the colours of the national flag. This was a telling and memorable lesson, identifying healthy food with the national colours — green for green vegetables and sprouts, orange for protein-rich food or dals and white for rice, chaas or butter milk and ghee.

Another popular tool developed by Chetna is the apron showing the male and female reproductive organs. These aprons are extremely popular and effective in lessons on reproductive sexual health for adolescents. Separate sessions are held with girls and boys to make them more comfortable while clarifying their doubts. Dr Prajapati says questions are asked about nightfall, wet underwears and whether girls too have nightfall. Boys also ask about menses or the monthly periods that girls have and why boys don’t have it. They also ask about condoms and emergency contraceptive pills whose advertisements they have seen. Doctors provide their mobile numbers so that boys/girls who are too shy to ask questions in a classroom can do so more discreetly on the phone. Many boys want to know where and how they can get condoms. Even 10 and 12 year olds ask about condoms.

To ensure the privacy of adolescents seeking information, there are also sealed drop boxes for seeking information and clarifying doubts. Written in bold letters on them is tamara prasno mane aap (give me your questions). There are 25 to 30 questions that we answer at every session when the box is opened, says Dr Rama. Post-session activities include a parents/nodal teacher meeting where parents are alerted about the health of youngsters with low body mass index (BMI), anaemia, etc and informed about the inputs for a healthy diet. About 24 per cent of the adolescents had BMI of less than 16. The normal is 18.5 and 24.9. Each school also has an IEC corner where all the books and material available under RKSK are placed.

Work on gender-based violence and non-communicable disease is on the cards but there is no resting on laurels for Dr Manish Fancy. It was interesting to see the doctor giving a demonstration on how the child should be held during breast feeding. Mothers complain of back pain because they hold the child wrong, he said. The district also provides five injections or iron sucrose therapy to anaemic pregnant women. There is a 26 per cent decline in anaemia in pregnant women, he says with understandable pride! Wanting to make adolescence “an age of opportunity,” he says, “as adolescents flourish so do their communities.”