India   All India  05 Sep 2019  Nitin Gadkari, Rahul Gandhi pulled over on violation of rules on Twitter amid new traffic fines
India, All India

Nitin Gadkari, Rahul Gandhi pulled over on violation of rules on Twitter amid new traffic fines

The hefty fines for traffic violations have triggered worry among law-breaking motorists across the country. 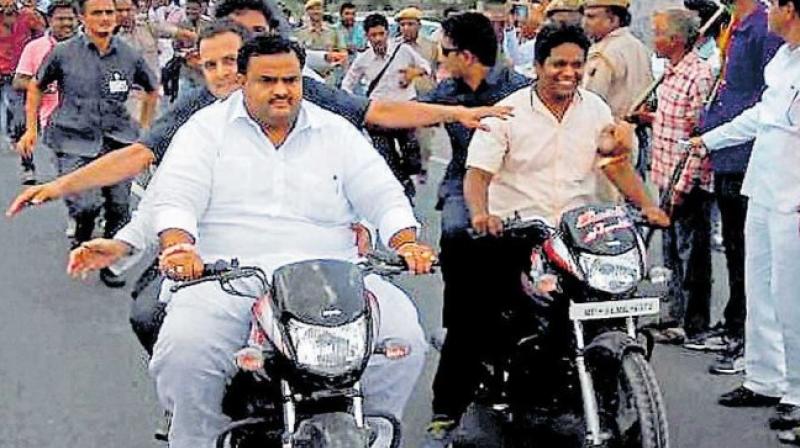 New Delhi: As the motorists across the country have been charged with heavy fines since a few days under the amended Motor Vehicle Act for traffic violations, Union Transport Minister Nitin Gadkari and Congress leader received flak on social media.

In a mock to the government’s implications of rules that have been affecting the common man, Twitter users pulled out old photographs of the two politicians on two-wheelers without helmets, asking the police to take action. One user even started a Change.org petition to have authorities take note.

The hefty fines for traffic violations have triggered worry among law-breaking motorists across the country. On Tuesday, a scooter rider was fined Rs 23,000 in Gurgaon for not carrying his vehicle's registration documents and his driving licence. Even the autorickshaw drivers have been also charged with such heavy penalties.

The new rules -- which brand common offences like the use of cellphone while driving, jumping traffic lights and driving on the wrong lane as "dangerous driving" -- came into effect on Sunday.

In case of any road offence by underage drivers, the guardian or owner of the vehicle will be held guilty. The penalty will be Rs 25,000 along with three years in jail and the registration will be cancelled.