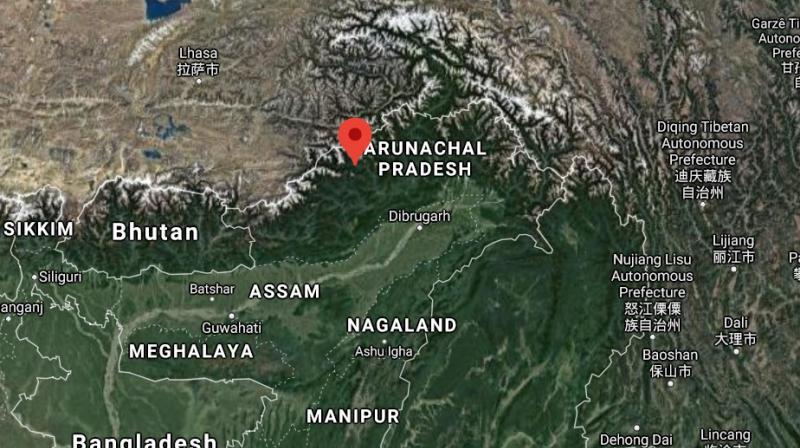 A Google map pinpointing Nacho, the area where the porters are said to have been detained by China's People's Liberation Army. (Photo: Google)

Guwahati: The Arunachal Pradesh police are investigating social media chatter that five porters engaged by the Indian Army were detained by China’s People’s Liberation Army (PLA) in a forest area on the border.

The incident is reported to have taken place two days ago but the administration of Upper Subansiri district said they have not received any complaint in this regard as of Saturday.

The deputy commissioner of the district, Kento Danggen, said they came to know of the matter from social media posts by local villagers. A defence spokesperson in Guwahati said he had not received any information on the matter from his headquarters.

News agency PTI quoted superintendent of police Taru Gussar as saying, “I have sent the officer-in-charge of the Nacho police station to the area to verify the facts. However, the report will be available only by Sunday morning."

A senior journalist of Itanagar, Jarpum Gamlin, said the incident became public when the porters’ families claimed to have learnt of it from a wireless message of the Indian Army.

The message reportedly said that the porters were from the Nacho administrative block, which I 120 km from the state capital Itanagar, and the detentions took place at Sera-7 area near the McMahon line.

PTI said they belong to the Tagin community.

The Itanagar-based newspaper Eastern Sentinel quoted Prakash Ringling, elder brother of Prasad Ringling, as saying, “We have received information from our village people that my brother along with four others has been abducted by the PLA near the McMahon Line. My brother was part of 36 people serving as porters near the China border.”

Congress MLA Ninong Ering said the five men had gone to fish in the area when they were taken by the PLA. "The Chinese have again started creating a nuisance. Just like in Ladakh and Doklam, they [Chinese Army] have started incursions in Arunachal Pradesh," he said, claiming it was the second time that the Chinese Army has abducted people from India.

Earlier, on March 19 this year, a 21-year-old man was abducted by PLA from Asapila sector near the McMahon line in Upper Subansiri district. He was released after 19 days in captivity.