An increase of 4,367 cases has been recorded in the active COVID-19 caseload in a span of 24 hours 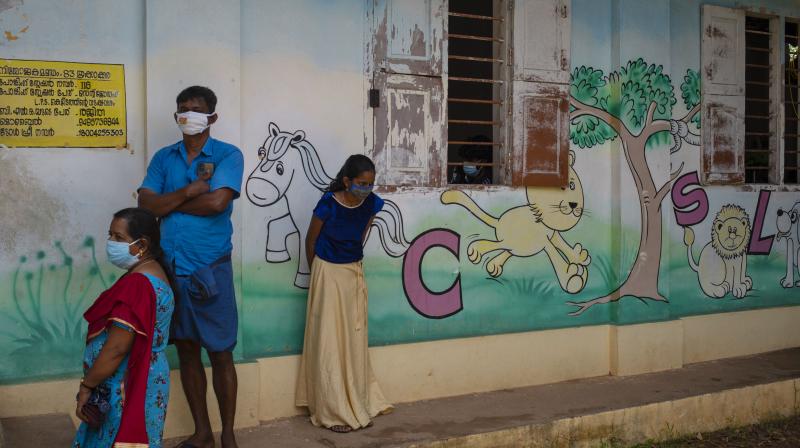 People wearing masks wait to get vaccinated for COVID-19 outside a school in Kochi, Kerala. (Photo: AP)

New Delhi: With 42,766 people testing positive for the novel coronavirus infection in a day, India's infection tally rose to 3,29,88,673, while active cases registered an increase for the fifth consecutive day, the Union health ministry said on Sunday.

The active cases have increased to 4,10,048, comprising 1.24 per cent of the total infections, while the national COVID-19 recovery rate was recorded at 97.42 per cent, the health ministry said.

An increase of 4,367 cases has been recorded in the active COVID-19 caseload in a span of 24 hours.

Less than 50,000 daily new cases are being reported for 70 consecutive days, the ministry said.

It said 17,47,476 tests were conducted on Saturday, taking the total cumulative tests conducted so far for detection of the infection in the country to 53,00,58,218. The daily positivity rate was recorded at 2.45 per cent.

Weekly positivity rate was recorded at 2.62 per cent. It has been below 3 per cent for the last 72 days, according to the ministry.

The number of people who have recuperated from the disease surged to 3,21,38,092 in the country, while the case fatality rate stands at 1.34 per cent, the data stated.

The cumulative COVID-19 vaccine doses administered in the country so far under the nationwide vaccination drive has exceeded 68.46 crore, it said.

The country crossed the grim milestone of two crore on May 4 this year and three crore on June 23.

The 308 new fatalities include 142 deaths from Kerala, and 64 from Maharashtra.

The health ministry stressed that more than 70 per cent of the deaths occurred due to comorbidities.