Modi and the broomstick

Modi needs to pay serious attention to imposing heavy fines on people indulging in actions that can only mar his cleanliness drive. 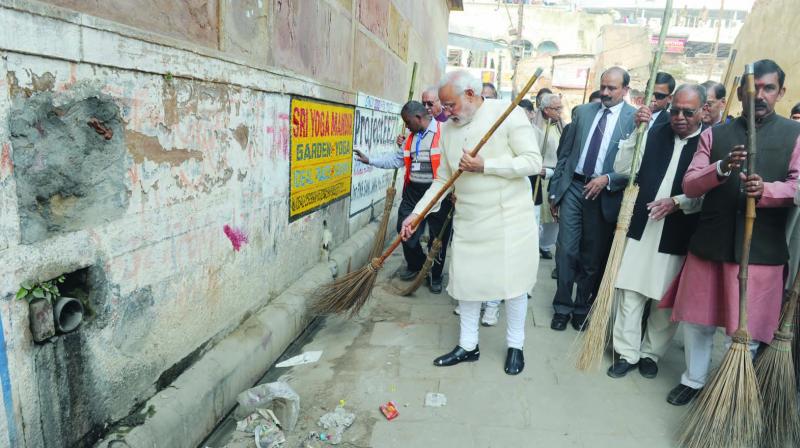 Prime Minister Narendra Modi must be credited for displaying no qualms in picking up the broomstick as a part of his cleanliness campaign. But is this enough? Lightly speaking, in the Indian language, the broomsticks are better known for the wife running after her husband with one in hand. With regard to one in his hand, Mr Modi apparently expects it help him achieve great heights. Can it? Hardly, nor can this be viewed as sufficient to redress grievances of ordinary Indian citizens. Just broomsticks — with Mr Modi in the lead — are least likely to help cleanse this country of all the dirt that is lying around, literally as well as symbolically.

Certainly, initiation of this campaign by picking up the broomstick has played a great role in giving a major boost to the image of Mr Modi among people at large. In fact, primary role of Mr Modi’s politicking has so far been devoted excessively to enhancing positive aspects of his image at home and abroad. Now, the big question is as to how far this can go in convincing the people about advantages that this actually holds for them. Afterall, speaking democratically and socially, Mr Modi and his political colleagues have been endowed with the primary role of heading the Centre by people’s votes. Also, it is the people’s taxes that play a key role in financially supporting the government. Against this backdrop, it is but legitimate for the people to expect financial benefits and not excessive burden from the government.

Recent developments are a minor indicator of questions beginning to be posed about efficacy of certain moves initiated by the present government apparently in interest of the people. However, with respect to substantial attention being paid to them, it may be more appropriate to focus a little on the premier’s cleanliness campaign. Considering the importance given by him to his image with a broomstick, it may be worth noting that similar brooms are not used in certain parts of the world, particularly the United States. Viewing them as an essential item of basic household goods, this scribe had a tough time shopping for the same during her stay in the US. The Indian-style brooms were just not available. So, Mr Modi apparently needs to give a second thought to promoting his international image regarding cleanliness through pictures on official calendars, diaries and elsewhere with a broom in hand.

While his vision about need and construction of toilets needs appreciation, the limitations in its implementation cannot be sidelined. If he can take quick steps regarding his demonetisation drive that included updating ATMs, printing of new notes and so forth, he certainly can adopt a similar approach regarding his cleanliness mission. Yes, demonetisation drive in general has not invited a favourable approach and nor has GST. To a degree, this also suggests that prior to initiating and also implanting these moves, Mr Modi probably did not pay much attention to gauging the possible mood of people towards these. Well, apparently, this also implies that when it comes to taking steps in directions viewed “constructive” by him, people’s opinion matters little to him. If this is really true then this can play a major role in giving a great boost to his cleanliness drive.

The standard Indian habit of paying greater importance to government’s moves and plans when it hurts or benefits their pockets cannot be ignored. In India, the practice of throwing garbage out of windows of moving vehicles still continues. The same can be said about spitting on walls, using open places, roadsides, railway tracks and other areas as toilets. Certainly, people in villages have slowly, but definitely started taking serious steps for construction of toilets in their homes. Gradually, in cities, more public toilets are visible along roadsides. But this is not enough.

What does one do about a drive in the capital displaying huge garbage piled in several areas? Or people paying extra attention to taking out their pet dogs for morning walks and ensuring that they defecate in parks, roads or elsewhere. They move on leaving the filth behind. In several countries, this is not permitted. The dog-owners are expected to carry the defecation with them and not leave it behind. Or else, there is a fine for it. Similarly, there is a fine for throwing garbage out of moving vehicles. The same is true for any action, considered as unhygienic — including spitting and/or using road-sides, building walls, etc, as toilets.