India   All India  05 Oct 2017  Satyagraha to Swachhagraha: A viewpoint from the Baha’i faith
India, All India

Satyagraha to Swachhagraha: A viewpoint from the Baha’i faith

Progress and prosperity of a nation depends on the quality of life of its citizens. 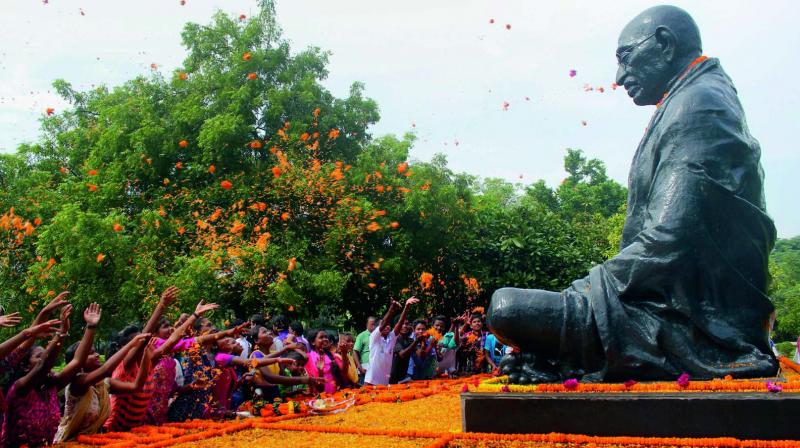 Constantly deluged by information packed with visuals and data, influencing our every thought and action only a fool would say “Ignorance is bliss!” and “What you don’t know won’t hurt you.” Ignorance is not bliss, anymore, it is a curse and what we don’t know can hurt a great deal. As conscious beings, we are committed to look into all matters that enter our consciousness. Endlessly, whys, whats and hows occupy our lives. Questions about where is our society headed and of ourselves are probably uppermost in everyone’s mind. Questions that are as relevant today as they were when Mahatma Gandhi lived; his 148th birth anniversary falls on October 2.

Understanding the sacrifices and sterling successes of our national role models are essential for translating into reality the Prime Minister’s call for sustainable development and well being of all Indians. Progress and prosperity of a nation depends on the quality of life of its citizens. The quality of life depends on how wisely we follow the rules that govern social relationships. Father of the Nation not only fought for the rights of the oppressed in the country under the colonial masters but also raised the consciousness of the entire population of its duties. Free India gave itself one of the best Constitutions in the world, enshrining, inter alia the rights and duties of every citizen for staying together, living together, toiling together and enjoying the fruits of success together. Yet the complexity of a nation-state so diverse, so vast, so engulfed by the turmoil of the world and machinations of some its neighbours — one begins to wonder whether there is light at the end of the tunnel.

Gandhiji’s attempt at social and economic development of villages, as outlined in his Constructive Programme, has a number of features in common with Bahá’í social and economic development projects, of which there are some 2,000 large and small spread all over the world in addition to the capacity development activities now on-going in some 5,000 geographic clusters worldwide. Much has been written about the Constructive Programme, and there is also quite a large body of Bahá’í literature on the subject of development. Three principles Gandhi and the Bahá’ís appear to have in common are worth mentioning: (a) reliance on grassroots implementation and driving forces, (b) a balanced approach involving spiritual as well as practical dimensions of development, and (c) an emphasis on selfless service to humankind.

With respect to Swachhagraha nationwide campaign Bahá’ís would invoke the concept of collective trusteeship. It is the duty of every citizen to lead clean and eco-friendly lives; uphold laws of the land for the proper regulation of the nation’s resources and equitable distribution of its wealth. Bahá’ís advocate that widespread poverty and economic problems are essentially spiritual in origin. Bahá’u’lláh writes in The Hidden Words: “O ye rich ones on earth! The poor in your midst are my trust; guard ye my trust, and be not intent only on your own ease.”

In the Bahá’í document, The Prosperity Humankind, it is stated: “Since the body of humankind is one and indivisible, each member of the race is born into the world as a trust of the whole. This trusteeship constitutes the moral foundation of most of the other rights — principally economic and social — which the instruments of the United Nations are attempting similarly to define. The security of the family and the home, the ownership of property, and the right to privacy are all implied in such a trusteeship. The obligations on the part of the community extend to the provision of employment, mental and physical healthcare, social security, fair wages, rest and recreation, and a host of other reasonable expectations on the part of the individual members of society.”

Materialism and fulfilment of one’s purely physical wants has become such a dominant feature of today’s lifestyles that even spirituality has become a packaged commodity. Has our progress so much undermined our sense of security, scrambled our value systems, resulting in hard new problems in managing our lives? What was Gandhiji’s strategy: Satyagraha — a holistic approach towards life, based on the ideals of truth and moral courage. The challenge for each citizen is to make the best choices of the life units. It isn’t what we have — or how much we have — that counts, it is what we do with what we have, that is to me the real meaning of “Sab ka saath, sab ka vikas”. An unshakeable belief in unity in diversity and spiritual strengths as its core principles is the way forward.

The author is the national trustee of Sarvodaya International Trust and national Trustee, Lotus Temple & Baha’i Community of India