The stench of ‘corruption’ and ‘cronyism’ in the Rafale Deal is nauseating, requiring urgent intervention,” the Congress memorandum said. 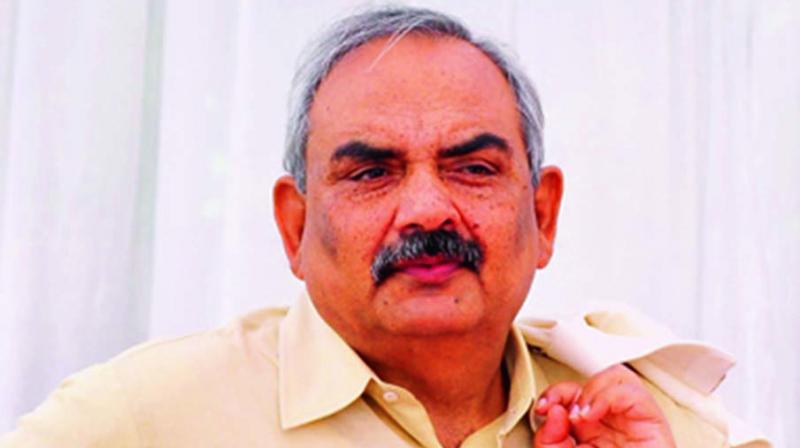 New Delhi: The Congress on Thursday urged the Comptroller and Auditor General (CAG) of India to carry out a forensic audit of the “Rs 60,150 crore” Rafa-le fighter jet deal and bri-ng all “facts” on record to enable Parliament to fix accountability for the all-eged scam in the contract.

A delegation of Congress leaders met the CAG Rajiv Mehrishi, their second visit within a month over the Rafale deal, and presented a memorandum to him along with fresh documents. The party had met the CAG on September 19 and thereafter the Central Vigila-nce Commission (CVC) on September 24 for a probe into the deal. Subsequent to the submissions made before the CAG earlier in the Rafale ‘scam’, the Congress alleged that documents and revelations made at the highest level in India and France have “exposed a deep rooted sinister conspiracy and a clear cut case of loss to public exchequer”. “The Rafale scam has now emerged as India’s Biggest ‘defence scam’. Skeletons are tumbling out of the closet everyday with repeated disclosures getting zero answers from the defence ministry. Infect, the only ‘truth’ of this government is ‘subterfuge’. The stench of ‘corruption’ and ‘cronyism’ in the Rafale Deal is nauseating, requiring urgent intervention,” the Congress memorandum said.

The party also alleged that the government is “unforgivably guilty” of causing loss to the public exchequer worth Rs 41,205 crore in the purchase of 36 ‘Made in France’ Rafale aircrafts, ‘off the shelf’ without ‘Transfer of Technology’. It also alleged that in a classic case of blatant ‘crony capitalism’, private entity Reliance Defence was deliberately enriched by award of a Rs 30,000 crore offset contract at the cost of Public Sector Undertaking (PSU) Hindustan Aeronautics Limited (HAL) by Prime Minister Narendra Modi and his government.

“The above facts reflect a clear-cut case of loss to public exchequer and rampant corruption coupled with a concerted conspiracy of by-passing PSU, HAL. It also reveals illegal and undue benefit to ‘crony friends’ by the highest echelons of power in the PM Modi government, in the unilateral purchase of 36 Rafale Jets from Dassault Aviation i.e India’s biggest ever defence contract worth Rs 60,150 Crore,” it said.

The party told the CAG that all the contours of conspiracy, corruption, endangering of national security and crony capitalism could only be uncovered through a pro-be by the joint parliamentary committee (JPC).

“It is expected that the CAG which has a Constitutional mandate and authority to scrutinize every document including original tender, understanding reached between Dassault and HAL and the arbitrary decision of the Prime Minister without any mandate from Cabinet Committee on Security (CCS), will undertake a forensic audit. We therefore request the CAG to bring all facts on record to enable the Parliament to fix accountability for Rafale scam,” the Congress memorandum said.

The opposition party had earlier taken the matter to the CAG and said that the federal auditor informed it is “already examining” the entire issue for its report to Parliament and assured all the contentions raised will be looked into. The government had said that it do not think a JPC or a CAG audit is set up to satisfy the “ego of an ill-informed leader” who repeats lies with alarming regularity, in an apparent dig at Congress chief Rahul Gandhi. The Congress leaders who were part of the delegation to CAG included Ahmed Patel, Anand Sharma, Jairam Ramesh, Randeep Surjewala, RPN Singh and Vivek Tankha.