Apex court to decide: If case is in SC, can protest go on? 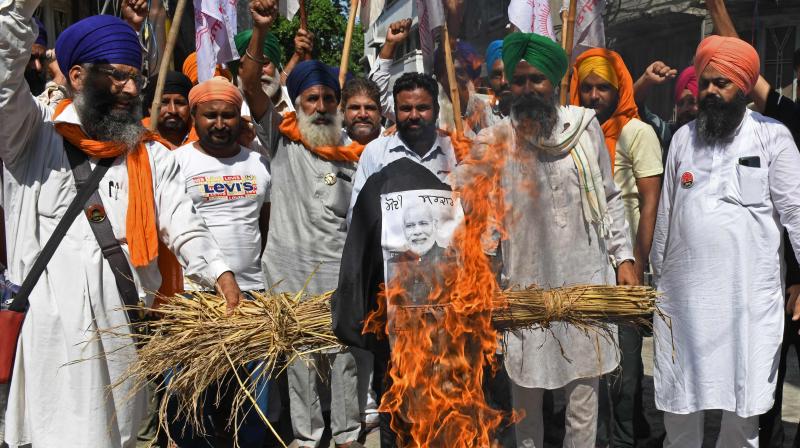 Farmers shout slogans as they burn an effigy of India's Prime Minister Narendra Modi and Uttar Pradesh state Chief Minister Yogi Adityanath during a protest in Amritsar on October 4, 2021, a day after clashes involving farmers who were protesting against the agricultural reforms at Lakhimpur in Uttar Pradesh in which at least nine people were killed. (Photo: AFP)

A bench of Justices A.M. Khanwilkar and C.T. Ravikumar decided to examine the “principle issue” whether after a challenge to a law before a constitutional court can there be an agitation for the repeal of that law at the same time as it transferred to itself the Kisan Mahapanchayat’s legal challenge to three farm laws pending before the Rajasthan high court.

Posting the matter for hearing on October 21, the court asked the Centre to give a “comprehensive reply” to the Kisan Mahapanchayat challenging the farm laws, and the plea seeking a direction to the police to permit the Mahapanchayat to hold a protest against the controversial laws at New Delhi’s Jantar Mantar.

The court, in its order, said: “We deem it appropriate to examine the central issue as to whether the right to protest is an absolute right and, more so, whether the writ petitioner having already invoked the legal remedy before the constitutional court by filing the writ petition, can be permitted to urge, much less assert, that they can still resort to a protest in respect of the same subject matter which is already sub-judice before the court.”

Referring to the petitions challenging the three laws that are already pending before the court, the judges in their order on Monday said: “We were informed that there are other writ petitions pending in this court involving a challenge to the validity of the three enactments. The registry may seek appropriate directions in this regard from the Hon’ble Chief Justice of India.”

Telling the Mahapanchayat that it can’t on one hand knock at the doors of a constitutional court challenging the laws and then simultaneously take to the streets to protest against them, Justice Khanwilkar wondered: “Why are the farmers protesting, against what?” He pointed out that the court had stayed the operation of the three laws and the Central government has undertaken not to go ahead with their implementation.

As Justice Khanwilkar hammered on the point that approaching the constitutional court challenging three farm laws and simultaneously taking to the streets can’t go together, attorney general K.K. Venugopal told the court that “the government has made it clear that it (the court) is the only recourse left to them”. Reiterating its position, the court said that “once a matter is sub-judice, where is the question of protest and the question of permission to protest. We will decide this question”.

“You can choose an option -- go to court, go to Parliament or take to the streets, but a challenge in a court and a protest can’t go together”, the court said, asking the agitating farmers to make a choice on the form of their protest.

Referring to the Lakhimpur Kheri incident, Justice Khanwilkar said that though the protesting farmers are saying their agitation is peaceful, they will not take responsibility for the violence and the destruction of public property there.

The Kisan Mahapanchayat’s lawyer, Ajay Choudhary, told the court that in their representation seeking to hold a protest at Jantar Mantar, apart from the three farm laws, there were other issues like increasing the minimum support price for agricultural produce. In pursuance of the court’s October 1, 2021 order, the Kisan Mahapanchayat said they have no association with the over 10-month-old ongoing farmers’ agitation, and it severed its relations with them after the January 26 Republic Day incident when some farmers resorted to violence in the tractor parade.

The court on October 1 asked the Mahapanchayat to state on affidavit that they were not part of the protests being carried on by blocking the national highways at the borders of the national capital.