India   All India  05 Oct 2021  Chhattisgarh CM Baghel claims he is not being allowed to leave Lucknow airport
India, All India 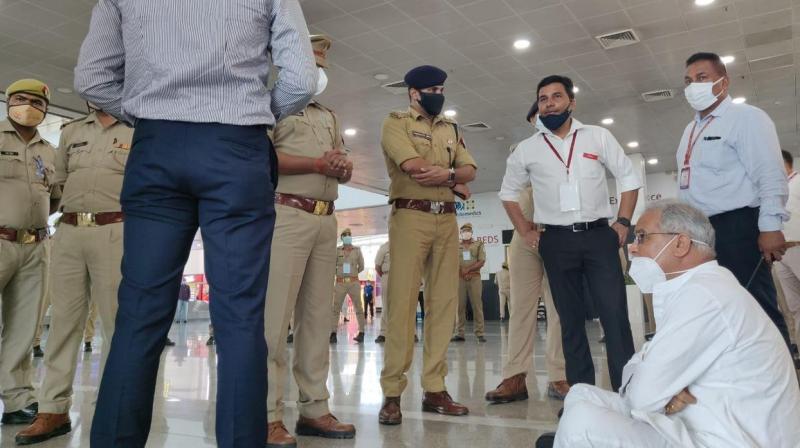 Earlier on Monday, the Uttar Pradesh government has urged Lucknow airport not to allow Chhattisgarh Chief Minister Bhupesh Baghel and Punjab Deputy CM Sukhjinder S Randhawa to land at the airport ahead of their scheduled visit to Lakhimpur Kheri yesterday. (ANI Photo)

New Delhi: Chhattisgarh Chief Minister Bhupesh Baghel on Tuesday claimed that he is not being allowed to leave the Lucknow airport, where he arrived to meet Congress leader Priyanka Gandhi Vadra at Uttar Pradesh's Sitapur.

"I came to Lucknow to proceed to meet Priyanka Gandhi ji at Sitapur. But I am not being allowed to leave the airport," he said.

"I am being stopped from going out of Lucknow airport without any orders," Baghel tweeted in Hindi.

Baghel had earlier said that he will visit Lakhimpur Kheri where eight people lost their lives on Sunday.

Earlier on Monday, the Uttar Pradesh government has urged Lucknow airport not to allow Chhattisgarh Chief Minister Bhupesh Baghel and Punjab Deputy CM Sukhjinder S Randhawa to land at the airport ahead of their scheduled visit to Lakhimpur Kheri yesterday.

Refuting SKM's allegations, MoS Teni said that his son was not present at the spot, adding that some miscreants merged with protesting farmers and pelted the stones on the car which lead to the 'unfortunate incident'.

Earlier, Additional Director General (Law and Order) of Uttar Pradesh Police Prashant Kumar said: "Government will give Rs 45 lakhs and a government job to the families of four farmers who died in Lakhimpur Kheri yesterday. The injured will be given Rs 10 lakhs. FIR will be registered based on farmers' complaints. Retired High Court judge will probe the matter."

The ADG also informed that no leader of any political party will be allowed to visit the district as section 144 of CrPC is in place.