India   All India  05 Nov 2019  Cow's navel produces gold with sunshine, that is why milk is yellow: WB BJP chief
India, All India

Cow's navel produces gold with sunshine, that is why milk is yellow: WB BJP chief

Bengal BJP chief compared 'desi and videshi (Indian and foreign)' cows and said: 'Only desi cows are our mother and not videshi ones.' 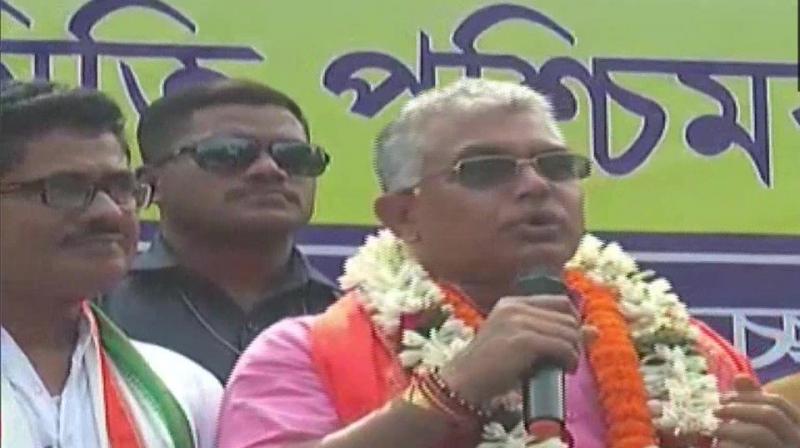 Ghosh was addressing a gathering on the occasion of "Gopa Ashtami Karyakram" in Burdwan, about 100 km from Kolkata. (Photo: ANI)

Burdwan: The West Bengal BJP chief Dilip Ghosh on Monday said that "intellectuals who eat beef should eat dog meat too" as it was all the same for their health. In a set of bizarre remarks, he also said the milk of cows in India is golden as it "has gold".

Ghosh said: “Indian breed of cows has a special characteristic, there is gold mixed in its milk, and that is why colour of their milk is slightly yellow. Cow's navel helps in producing gold with help of sunshine."

"The cow is our mother, we stay alive by consuming cow milk, so if anyone misbehaves with my mother, I will treat them the way they should be treated. On the holy soil of India, killing cows and consuming beef is a maha-apradh (grave crime)," Dilip Ghosh was quoted as telling news agency ANI on Monday in Burdwan.

"A few intellectuals eat beef on roads, I tell them, why only cows, eat dog meat too, their health will be fine whichever animal they eat, but why on roads? Eat inside your home," said the BJP leader.

Ghosh was addressing a gathering on the occasion of "Gopa Ashtami Karyakram" in Burdwan, about 100 km from Kolkata.

The Bengal BJP chief also compared "desi and videshi (Indian and foreign)" cows and said: "Only desi cows are our mother and not the videshi ones."

This is not the first time that Ghosh made controversial remarks on various issues.

In September, Ghosh had claimed that "bribe" worth Rs 2 lakh was being offered to prove people were committing suicides in West Bengal due to National Register of Citizens (NRC).

Earlier this year, the West Bengal BJP chief was booked for reportedly asking his party workers to beat up their TMC counterparts and police. He made the purported comment in connection to the recent clashes between TMC and BJP party workers in the state.