The powerful blast caused commotion in the area and many people were seen running for safety. 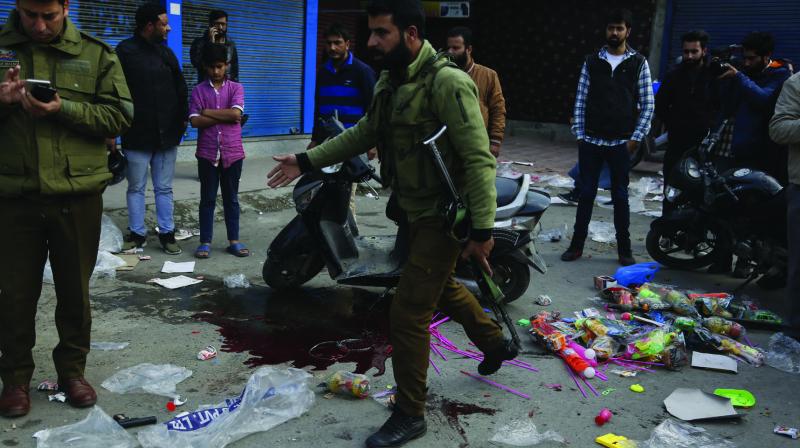 A policeman walks past a pool of blood at the spot of a grenade explosion at a market in Srinagar on Monday. (Photo: AP)

SRINAGAR: A toy vendor from Saharanpur (Uttar Pradesh) was killed and 44 other persons, including three Sashastra Seema Bal (SSB) personnel and civilians, were injured in a grenade blast in a Srinagar marketplace on Monday afternoon.

This was the third grenade attack in Kashmir Valley in the last two weeks and the latest in a series of terror acts that took place since October 14 and was blamed by the police on separatist militants.

In earlier attacks, 11 people, including four non-local truck drivers, six labourers and an apple buyer, were killed and scores injured in various parts of the Valley.

The police said that suspected militants tossed a hand grenade towards a makeshift vegetable market along Hari Singh High Street in uptown Srinagar at 1.20 pm, killing a toy vendor from UP and injuring forty-one shoppers and pedestrians and three SSB men.

The slain man has been identified as 35-year-old Rinku Singh.

The police and hospital sources said that the condition of two of the injured persons Aijaz Ahmed and Fayaz Ahmed–both local Kashmiris-is stated to be critical.

The attack took place at a time when the shops in Hari Singh High Street and elsewhere in Srinagar had been shut after remaining open for a few hours in the morning as the stalemate in the Valley over the abrogation of Article 370 and bifurcating Jammu and Kashmir into two Union Territories continues. However, roadside vendors were still doing business in several parts of Srinagar including Hari Singh High Street, the police and witnesses said.

The powerful blast caused commotion in the area and many people were seen running for safety.

The police and Central armed police forces personnel deployed in the area were soon joined by reinforcements to conduct searches but no arrests could be made, the witnesses and police sources said.