In September, the RBI restricted the activities of the PMC Bank for six months. 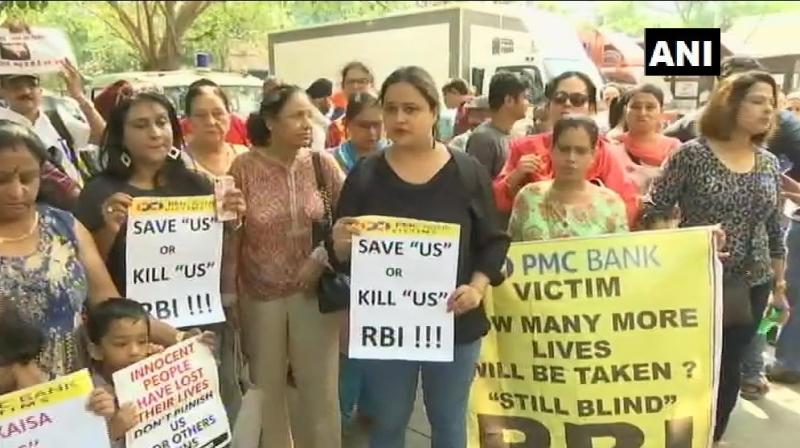 A protestor, Sadhika Sayal, said that Maharashtra Chief Minister Devendra Fadnavis' statement that he would personally take up the issue with the Centre is ambiguous. (Photo: ANI)

"We have been protesting for 41 days. 10 deaths have taken place. As a senior citizen, I have been pleading to get back my money. There is collusion between RBI and PMC officials. I need money for my wife's surgery. All my money is in PMC," Professor Chandrashekar, a bank depositor participating in the protest, told ANI.

Echoing similar sentiments, another protestor, Sadhika Sayal, said that Maharashtra Chief Minister Devendra Fadnavis' statement that he would personally take up the issue with the Centre is ambiguous.

"There has been no assurance to us from the RBI or the government. It's over 40 days now. 10 people have already died. Senior citizens participating in the protest faint every day. Their life savings are there in PMC. The Chief Minister has made an ambiguous statement (over the issue) but what concrete steps are they going to take? Nobody has told us anything," she said.

In September, the RBI restricted the activities of the PMC Bank for six months and asked it not to grant or renew any loans and advances, make any investment or incur any liability, including borrowing of funds and acceptance of fresh deposits after an alleged fraud of Rs 4,355 crore came to light.

The central bank had initially capped the deposit withdrawal at Rs 10,000 but later raised it to Rs 40,000.

The Enforcement Directorate (ED) has seized and identified movable and immovable assets worth more than Rs 3,830 crore owned by HDIL in connection with the case.