The FIR was registered against the officers on the directions of Chief Minister Adityanath on Saturday. 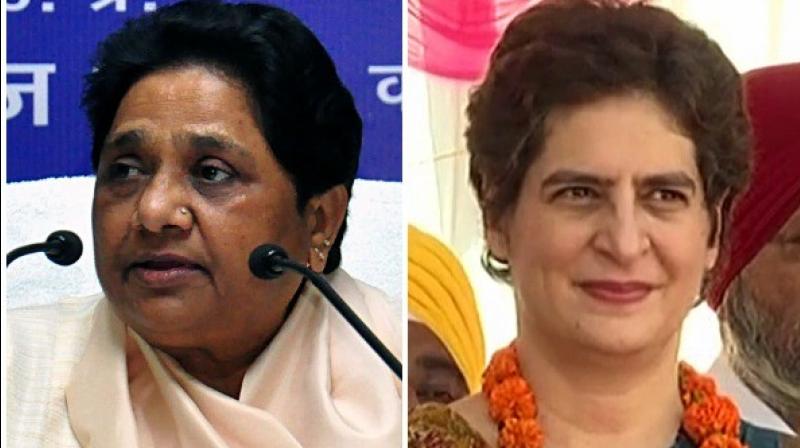 Slamming the Yogi Adityanath government, Priyanka Gandhi accused it of maintaining silence for two years and asked money of which departments have been put in 'defaulter companies'. (Photo: ANI)

Lucknow: Congress general secretary Priyanka Gandhi Vadra and Bahujan Samaj Party (BSP) chief Mayawati on Tuesday hit out at the BJP government in Uttar Pradesh over provident fund (PF) investments of Power Corporation in a scam-hit company and said interests of employees should be safeguarded.

Slamming the Yogi Adityanath government, Priyanka Gandhi accused it of maintaining silence for two years and asked money of which departments have been put in "defaulter companies".

"And money of which departments have been put in defaulter companies. All things should come before people. A reply will have to be given as it is a question of hard-earned money (of employees)," she added.

Mayawati said the BJP government could not prevent the "mega scam" of about Rs 2200 crore provident fund of thousands of Uttar Pradesh power engineers going in a private company. "

+What will happen with allegations and counter-allegations? The government must first ensure that the interests of employees are safeguarded and see that their losses are recovered," she said in a tweet.

"The gross failure of the Uttar Pradesh government and now their lax attitude is not going to get any results. Along with the investigation by the CBI inquiry, an inquiry should also be ordered against the people sitting at high positions who have been irresponsible. People are waiting for this." she added.

Two officers were arrested in a case related to the alleged investment of over Rs 2,600 crore of UPPCL (Uttar Pradesh Power Corporation Limited) employees' PF money into the scam-hit DHFL.

Praveen Kumar Gupta, who was the secretary of the Uttar Pradesh State Power Employees Trust and the Provident Fund Trust of the Uttar Pradesh Power Corporation in 2016, and then Director, Finance, Sudhanshu Dwivedi, have been arrested after an FIR was lodged against them at Hazratganj Police station here.

The FIR was registered against the officers on the directions of Chief Minister Adityanath on Saturday. The state government has recommended a CBI probe into the issue.