India   All India  05 Nov 2019  T'gana govt says transport workers on strike won’t be taken back after Nov 5
India, All India

On Monday, workers staged sit ins in front of depots, raised slogans in support of their demands. 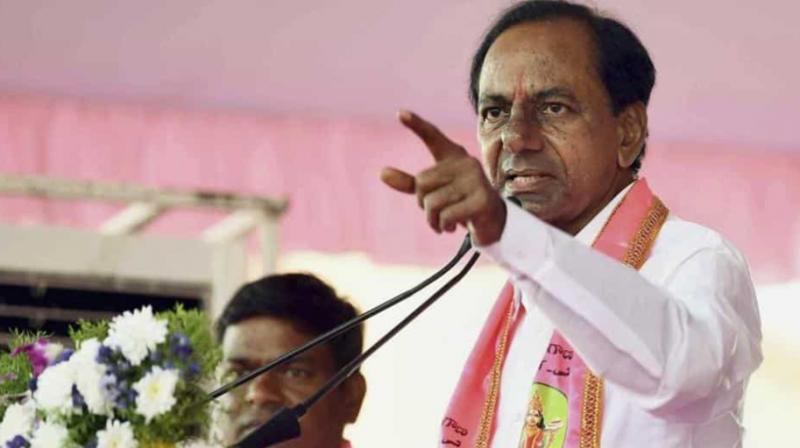 Chief Minister K Chandrasekhar Rao had on Saturday said the state cabinet decided to allot 5,100 of 10,400 routes to private operators and warned that the other routes would also be given to them if those on strike don't join duty by the midnight of November 5. (Photo: File)

Hyderabad: Toughening its stance against the striking TSRCTC employees, the Telangana government on Monday decided not to allow any of them to work after the expiry of the November 5 deadline set by it to rejoin duty.

The government said if the employees continued their stir, it would go ahead with the plan to permit private bus operators to run services in 5,000 of the total of 10,400 routes, leading to a situation where the Telangana State Road Transport Corporation virtually ceased to exist.

Employees would solely be responsible for such a situation and should therefore decide whether to save their jobs or trouble their families, a press release said.

"But according to legal experts, the High Court has not given any directives to the government on the strike. There is nothing the court can do."

"If the High Court verdict is (on the) contrary, having come this far on the matter, both the RTC and government will move the Supreme Court," the release said.

The meeting opined that the matter would get delayed further if it goes to the Supreme Court, it said.

"Going by past experience, the case in Supreme Court may drag on for months and years. It will be a never-ending battle. Hence this will not do any good to the workers," it said, quoting opinions expressed in the meeting.

Chief Minister K Chandrasekhar Rao had on Saturday said the state cabinet decided to allot 5,100 of 10,400 routes to private operators and warned that the other routes would also be given to them if those on strike don't join duty by the midnight of November 5.

Meanwhile, the unions urged the government to hold talks with them to end the nearly month long state-wide strike, even as officials hoped a good number would report for duty by the November 5 deadline.

The leader of employees unions' Joint Action Committee (JAC) E Ashwathama Reddy claimed that five of the 11 employees who reported for work on Sunday following the government's deadline, had since "returned".

"We once again appeal (to the Chief Minister)... invite the JAC for talks," he told reporters.

Citing alleged suicides and deaths of employees due to heart attacks, he asked the government to adopt a humanitarian stance on the issue.

On the 31st day of the stir on Monday, workers staged sit ins in front of depots, raised slogans in support of their demands and tried to prevent some buses being taken out by RTC, part of alternative arrangements being tried out.

The unions claimed that an employee died of a heart attack in Nalgonda district.

Three employees had allegedly ended their lives and at least five suicide attempts were reported since the strike began on October 5.

JAC, which is spearheading the strike, had said that the government should first hold talks with them to resolve the issue and reiterated it would continue the stir.

TSRTC workers have been taking out protest rallies across the state over their demands, with political parties and different organizations extending support to the stir.

Nearly 48,000 employees had boycotted work and begun an indefinite strike from October 5 across Telangana on a call by the JAC, demanding merger of RTC with the government, pay revision, recruitment to various posts, among others resulting in state-run buses staying off the roads.