Lawyers have been protesting at several places across the city against the scuffle that took place in Tis Hazari. 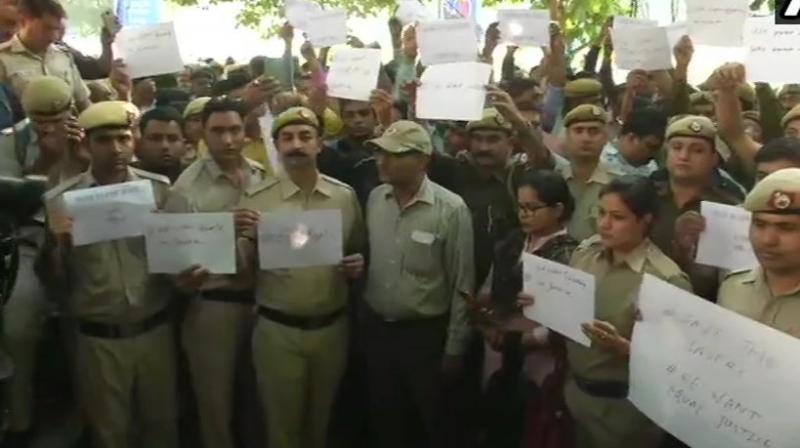 Police personnel on Tuesday held a protest outside Police Head Quarters (PHQ), against the clash that broke out between police and lawyers at Tis Hazari Court on November 2. (Photo: ANI)

New Delhi: Delhi Police Commissioner Amulya Patnaik on Tuesday urged protesting police personnel to return to work and said they should behave like a "disciplined force".

Patnaik was addressing the protestors outside the police headquarters in ITO. They have been agitating against the attack on a policeman outside the Saket court on Monday.

"We have to behave like a disciplined force. The government and the people expect us to uphold the law, it is our big responsibility. I urge you to resume duty," Patnaik told the police personnel, adding that their concerns will be addressed.

Earlier in the day, police personnel held a protest outside Police Head Quarters (PHQ), against the clash that broke out between police and lawyers at Tis Hazari Court on November 2.

On Monday, IPS Association had also said that the police personnel all around the country stands with those who were assaulted and humiliated.

"Incident involving police and lawyers unfortunate. All should take a balanced view of it based on facts in public domain. Countrywide, police stands in solidarity with those police personnel subjected to physical assault and humiliation. Condemn all attempts to break law, by anyone!" the IPS association tweeted.

#WATCH Delhi: Police personnel raise slogans of "we want justice" outside the Police Head Quarters (PHQ) in ITO. They are protesting against the clash that broke out between police & lawyers at Tis Hazari Court on 2nd November. pic.twitter.com/XFAbQn2gay

The development came a day after the chairman of the coordination committee of all bar associations of district courts, Mahavir Sharma stated that advocates in all district courts in the national capital will abstain from work indefinitely.

On the other hand, the Bar Council of India (BCI) has appealed to the members of the legal fraternity to maintain peace and harmony in the courts and resume their court work from Tuesday.

Lawyers have been protesting at several places across the city against the scuffle that took place in Tis Hazari. A group of lawyers also protested outside the Supreme Court on Monday, demanding the enforcement of Lawyers' Protection Act.

One Assistant Sub-Inspector has been suspended and a special investigation team (SIT) has been constituted to probe the violence on Saturday where a clash had broken out between lawyers and cops over an alleged parking issue at Tis Hazari court, in which several police officials and lawyers were injured.

A total of around 20 police personnel including Additional Deputy Commissioner of Police (North), two Station House Officers (SHOs) and eight lawyers sustained injuries in the incident.