Many Delhi cops who were protesting on Tuesday in the crowd remembered Bedi who was then at the heart of the controversy. 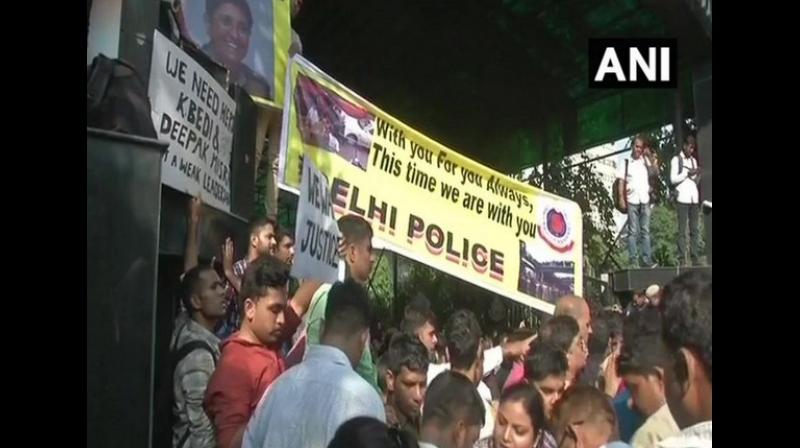 Bedi, the first woman IPS officer, on January 20 (1988) made a statement at a press conference justifying the police action and criticising the order of the Magistrate in discharging the alleged 'thief' (Photo: ANI)

New Delhi: As thousands of cops shouted, "Humara Commissioner (of Police) kaisa ho, Kiran Bedi jaisa ho" while demanding action against lawyers involved in attack on their colleagues, their protest on Tuesday was reminiscent of the 1988 police-lawyer clash at Tis Hazari Courts Complex when the then 'super cop' of Delhi had invited the ire of advocates.

It was in January 1988 when Delhi Police arrested an advocate named Rajesh Agnihotri after he was apprehended by the students of St Stephen's College for allegedly stealing from a ladies common room.

When the advocate was produced before Tis Hazari Court on January 16 that year with his hands cuffed, lawyers started protesting saying it is illegal.

The Metropolitan Magistrate discharged the lawyer the same day and also directed the Commissioner of Police to take action against the guilty police officials.

The lawyers went on strike from January 18 in support of their demand for action against the police officials.

Bedi, the first woman IPS officer, on January 20 made a statement at a press conference justifying the police action and criticising the order of the Magistrate in discharging the alleged "thief".

The next day when a group of lawyers sought to meet Bedi to express their concern at her office, located in the same Tis Hazari Courts Complex, a lathi-charge was ordered on them in which several lawyers were injured.

For the next two months, the lawyers stopped courts from functioning in Delhi and neighbouring states, demanding Bedi's resignation.

The strike was called off after the Delhi High Court constituted a two-judge committee headed by Justice D P Wadhwa, the then sitting judge at HC, to investigate the matter.

The committee in its report held that hand-cuffing of lawyer was illegal and recommended that Bedi be transferred.

The incident haunted Bedi in 2015 when she was declared a candidate for Delhi's Chief Minister by the Bharatiya Janata Party in Assembly polls.

Lawyers of all the six district courts in the national capital condemned the BJP decision to nominate Bedi.

The coordination committee of all district court bar associations had said the "legal fraternity wants to place on record that the decision to make her (Bedi) the chief ministerial candidate on the basis of her administrative skill is contrary to the records".

It further said that when she was posted as the DCP North in New Delhi, Bedi did "everything to avenge the lawyers of Tis Hazari Court who were demanding commission of enquiry against brutal 'lathi' charge on innocent lawyers".

Advocate S K Bagga, who won the last assembly election from Krishna Nagar constituency in East Delhi against Bedi, recalled the 1988 incident and said that the former IPS officer had brutally lathi-charged, tear gased and ordered use of water canons against the agitating lawyers in which 100 of them were seriously injured.

He recalled that another advocate Rajeev Khosla, the prominent bar leader now, suffered serious eye injury due to the water canon in 1988.

However, he said only difference this time is that the police personnel have come out on roads and agitating against the lawyers for the Saturday and Monday incident in which cops have been thrashed by the advocates.

Recalling the similar lawyer-police clash, many Delhi cops who were protesting on Tuesday in the crowd remembered Bedi who was then at the heart of the controversy.