Afghan President rejects Islamabad’s aid, asks Pak to use it to fight extremism. 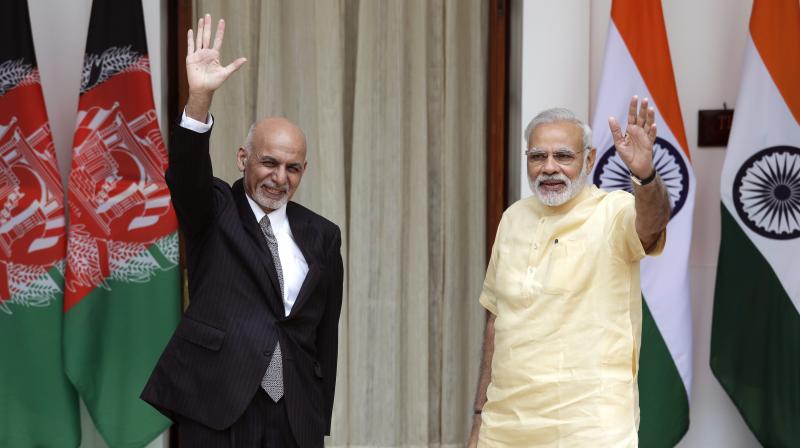 New Delhi/Amritsar: In a humiliation for Pakistan on Indian soil, Afghan President Ashraf Ghani accused it of backing terror by launching an undeclared war against his country. Speaking at the Heart of Asia (HoA) conference in Amritsar, not far from the Indo-Pak border, on Sunday, Mr Ghani rejected the Pakistani offer of financial assistance. He told Pakistan PM’s advisor on foreign affairs Sartaj Aziz that Islamabad’s offer of $500 million could instead be used by Pakistan to containing extremism.

In what was music to India’s ears, President Ghani also lavished praise on Prime Minister Narendra Modi. “India’s support is impressive, both in its scale and delivery.  India’s assistance is …aimed at improving people’s lives. It is transparent and without strings attached. It is a convergence of interests and values of two states inspired by the belief in cooperative advantage,” he said.

A stunned Pakistan put up a week defence later, with Mr Aziz saying that it was simplistic to blame only one country for the recent upsurge in violence (in Afghanistan). The conference happened amid heightened tension between India and Pakistan following a string of terror attacks and border skirmishes.

The HoA is an annual meet of regional and global powers to explore ways to fight terrorism and rebuild the war-ravaged Afghanistan. Forty-five countries and international organisations attended two days of deliberations with a call for a war on terror taking the centre stage.

Launching an all-out attack on Pakistan in his speech, Mr Ghani said, “Despite our intense engagement with Pakistan on bilateral and multilateral basis, the undeclared war — the name that I gave to the phenomenon in the winter 2014 — not only has not abated but also intensified during 2016, with special intensity right after the Brussels Conference.”

He said that a key Afghan Taliban leader had admitted that the Taliban would not last even for a month if it did not have sanctuaries in Pakistan. Analysts say Pakistan has historically backed the Afghan Taliban as a hedge against the influence of arch rival India, with whom Pakistan has fought three wars, in its backyard.

“We must confront the elephant in the room... At the heart of the problem are the nature, scale and scope of the fifth wave of political violence and terrorism… Last year we suffered the highest number of civilian casualties and military-related deaths in the world. This is unacceptable,” he said.

Kabul is furious at Pakistan for backing the Afghan Taliban and encouraging it to launch terror attacks on Afghan soil. Afghanistan had also joined India in boycotting the proposed SAARC summit — planned to have been held in Islamabad last month and was eventually cancelled — in protest against Pakistan-backed terror.

Referring to PM Modi, President Ghani said, “You honoured us by visiting Afghanistan twice this year to inaugurate two important iconic projects. The Afghan Parliament will stand as an enduing testament of the enduring relationship between the world’s largest democracy and a people and government committed to the realisation of democratic rights and obligations of a free citizenry enshrined in our Constitution.”

“Your words, assuring the Afghan people of the support of 1.4 billion strong Indian people, have been quickly matched by deeds, as demonstrated by your pledge of $1 billion of new developmental assistance…The agreed cargo air corridor to be soon launched will give Indian and Afghan consumers and producers unimpeded access to each other’s products and services.”

In its reaction, Pakistan delegation head Sartaj Aziz said, “We need to have an objective and holistic view. The peace process for talks between the Afghan government and the Taliban has not yet produced positive results. Pakistan has been making serious efforts for facilitating the peace talk.”