The first hearing is set a day before the 25th anniversary of the demolition of the Babri Masjid, a medieval-era mosque. 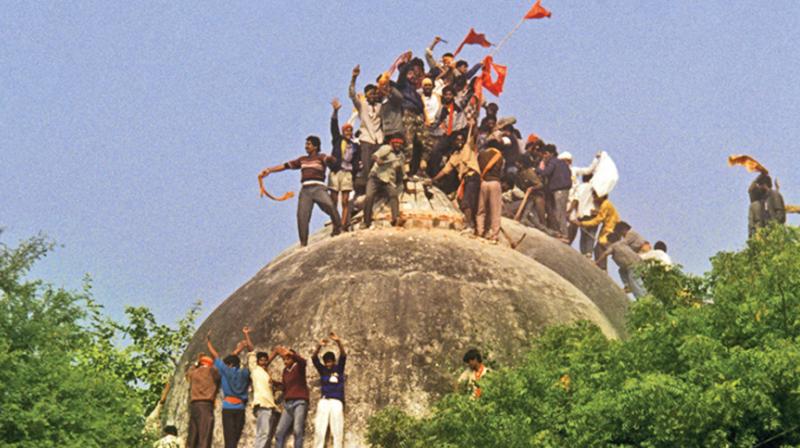 The Babri Masjid was built by Mughal emperor Babur but Hindus claim that a Ram temple that originally stood there was demolished to construct the mosque. (Photo: File)

New Delhi: The Supreme Court on Tuesday will commence the final hearings in the long-standing Ayodhya dispute, which started following the demolition of Babri Masjid that triggered massive riots in various parts of the country resulting in the deaths of hundreds of people.

The first hearing is set a day before the 25th anniversary of the demolition of medieval-era mosque.

A specially constituted bench of Chief Justice Dipak Misra and Justices Ashok Bhushan and Abdul Nazeer will be hearing a total of 13 appeals filed against the 2010 judgement of the Allahabad High Court in four civil suits.

The stakeholders in the case had moved the apex court after the Allahabad High Court directed the Sunni Waqf Board, the Nirmohi Akhara and the Lord Ram Lalla to settle for a three-way division of the 2.77-acre disputed site.

A sect of Muslims, under the banner of Shia Central Waqf Board of Uttar Pradesh, had earlier approached the court offering a solution that a mosque could be built in a Muslim- dominated area at a "reasonable distance" from the disputed site in Ayodhya.

However, its intervention was opposed by the All India Sunni Waqf Board which had claimed that judicial adjudication between the two sects had already been done in 1946 by declaring the mosque as one which belongs to the Sunnis.

Recently a group of civil rights activists also moved the apex court seeking intervention in the Ayodhya dispute and urged it to consider the issue saying it is not just a dispute over property but has several other aspects which would have far-reaching effects on the "secular fabric of the country".

In pursuance to the apex courts earlier direction, the Yogi Adityanath government has submitted English translation of exhibits and documents likely to be relied upon, as these were in eight different languages.

The top court had on August 11 asked the UP government to complete within 10 weeks the translation of the evidence recorded for adjudication of the title dispute in the high court. It had said it would not allow the matter to take any shape other than the civil appeals and would adopt the same procedure as was done by the high court.

BJP leader Subramanian Swamy, an intervenor in the matter, had attempted to raise the issue of fundamental right of religion of the Hindus under Article 25 of the Constitution.

Many of the original plantiffs and defendants in the matter including Mohd Hashim, who was the first person to take the matter to the apex court, have died.

A three-judge bench of the Allahabad High Hourt, in a 2:1 majority ruling, had said the land be partitioned equally among three parties -- the Sunni Waqf Board, the Nirmohi Akhara and Ram Lalla.

The Babri Masjid was built by Mughal emperor Babur in Ayodhya in 1528.

The Hindus, however, claim that a Ram temple that originally stood there was demolished to construct the mosque.

Citing this, Hindu zealots brought down the mosque on December 6, 1992.

Meanwhile, on Tuesday, a Delhi court will deliver its verdict in connection with the terrorist attack on the makeshift Ram Temple in Ayodhya in 2005.