Another group of gunmen loot Rs 97K from bank. 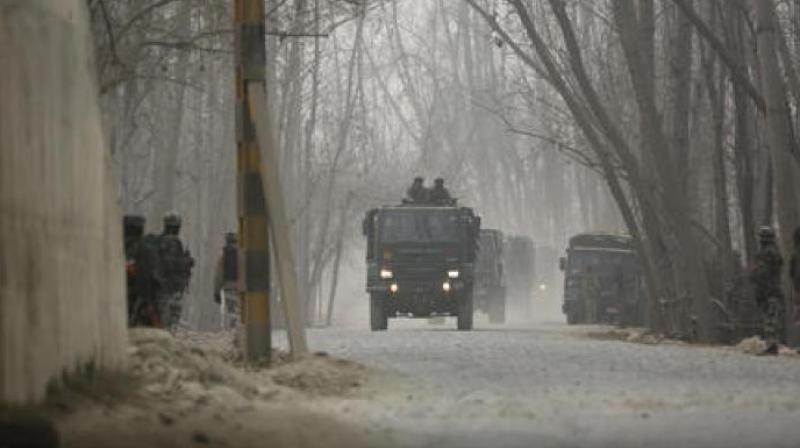 Four civilians were injured in clashes with the security forces in Bonigamar area of Qazigund in southern Kulgam district following the encounter, a report said. (Photo: PTI | Representational)

Srinagar: An Army jawan and two Lashkar-e-Tayabba (LeT) cadres were killed and another soldier wounded in a militant attack and counter attack by security forces in Qazigund, the gateway into Kashmir Valley from the south, on Monday.

Four civilians were injured in clashes with the security forces in Bonigamar area of Qazigund in southern Kulgam district following the encounter, a report said.

The police said the militants targetted an Army convoy while moving along the Srinagar -Jammu  highway on Monday afternoon, injuring a Sikh Li soldier. He was rushed to a military hospital in Srinagar where he succumbed in the evening.

The Army returned fire forcing the attackers to run away into a nearby house. In ensuing encounter, another Army jawan was injured, the police said.

The security forces used improvised explosive devices to blow up the house in their final assault against holed up militants, the police sources said.

J&K’s DGP Shesh Paul Vaid said the bodies of two militants have been recoveted from the encounter site.

Soon after the killing of militants, surging crowds clashed with the security forces. The latter used force to quell a “violent mob” injuring four persons, the sources said.

Earlier the LeT had claimed responsibility for attacking the Army convoy.

Meanwhile, another group of gunmen looted Rs 97,256 from a local branch of Jammu and Kashmir Bank at Noorpora in southern Pulwama district.