Lokpal Act: Anna Hazare to protest against Govt on March 23

Hazare accuses the BJP-led central government of not being serious about fighting corruption. 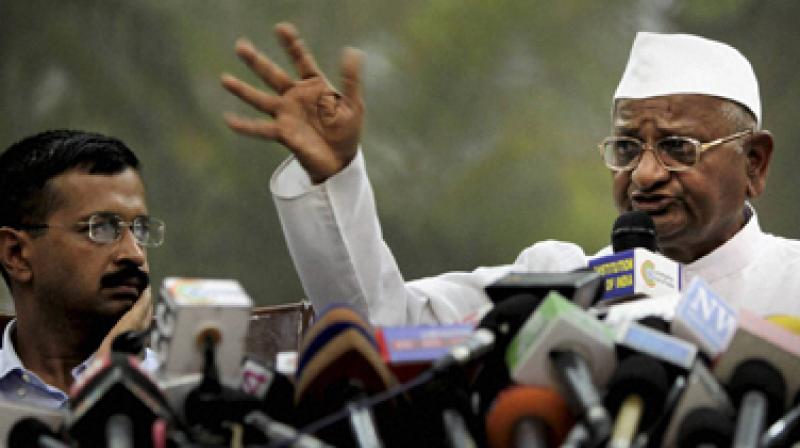 Hazare said the recent amendments in the Lokpal Act, which removed a clause that made public servants declaring their assets compulsory, reflected the government’s intention in fighting graft. (Photo: PTI/File)

New Delhi: Upset over the non-appointment of Lokpal for the last four years, anti-graft activist Anna Hazare on Tuesday announced a protest against the government on March 23, observed as the Martyrs’ Day, in 2018.

Addressing a press conference in New Delhi, the octogenarian accused the BJP-led central government of not being serious about fighting corruption.

He said the recent amendments in the Lokpal Act, which removed a clause that made public servants declaring their assets compulsory, reflected the government’s intention in fighting graft.

Hazare added that the government was using the pretext that Lokpal could not be appointed as there was no Leader of Opposition in the Lok Sabha and asserted that it could at least appoint the Lokayuktas in the BJP-ruled states.

Hazare announcing a protest against the government in the capital brings back the memories of his 2011 agitation against the then Congress-led UPA government. His protest and hunger strike then had gripped the minds of millions.

Facing graft charges, the Congress was decimated in the 2014 general election.

Hazare said he had written over 30 letters to the NDA government, but received no response, and wondered whether there was any “ego” involved in not responding to his letters, which questioned the non-appointment of Lokpal.

The 80-year-old activist also attacked the Centre over the plight of farmers in the country and said the government had failed to honour its promise of implementing the Swaminathan Commission report and that the farmers would get 50 per cent more money over their investments in cultivation.

“Since 1995, 12 lakh farmers have committed suicide in the country and the governments have shown no sensitivity towards them. There is a huge gap between the prime minister’s words and acts,” Hazare said.