The cost of Google Glasses are approximately one lakh rupees or $ 1500 and upwards depending on the model. 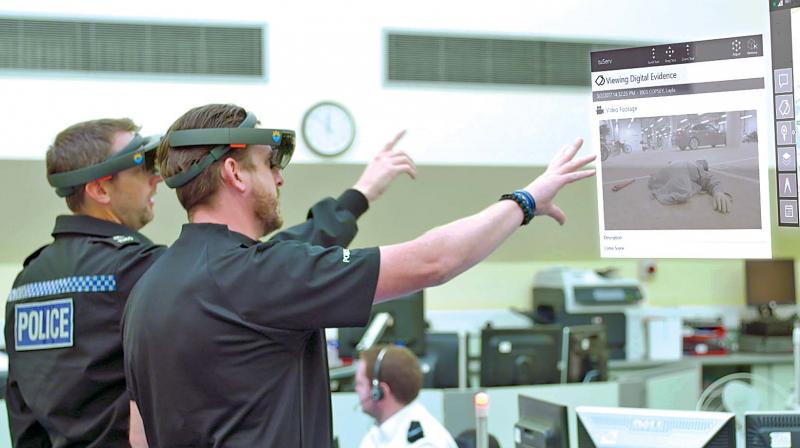 When the police officer at the scene is exploring the area, footage from his shoulder camera or Hololens is conveyed to forensic scientists or crime specialists at different locations.

Back in 2002, I saw Minority Report a sci-fi film in which Tom Cruise flings stuff blithely into translucent screens using gestures to get displays of information in his field of vision. When he strolls down the mall he's bombarded with ads mentioning his name, by specific AR “Augmented Reality” targeted adverts telling him what’s on offer.

The coolest thing being, that Steven Spielberg, who directed the movie, was bang-on with his prediction of AR components becoming useful in future, but the only thing he speculated wrong was that - it has taken just a decade since the release of the movie for AR to become a reality instead of the distant dystopian 2054.

Fortunately, this technology is today available for the police. Several countries around the world have already started embracing it for policing. We will browse through some of the technologies which have been introduced, and some new AR tools which have been developed but are yet to be noodled around like the R7 glasses.

The Bedfordshire Police, using Microsoft HoloLens and a program from UK-based software company Black Marble, in the UK are recording crime scenes with AR headsets to let senior officers re-experience the scenes without being there. Currently, police forces rely on photographs and the occasional video of crime scenes. But these could be misinterpreted by someone who's not there when the images are first captured.

The 3D rooms created by HoloLens could, in theory, be more accurate. Officers can step into a room virtually and see a crime scene as it actually was rather than rely on the photography skills of their colleagues. AR, used this way, is tipped to be a game-changer when it comes to fighting crime.

Another police force is using an augmented reality headset to capture crime scenes and upload them back to head office. To my astonishment, I came across a firm in Chennai offering a similar technology and had an opportunity to witness a mind-blowing demo conducted by them.

The Dutch police similarly have developed a hardware and software to use augmented reality at the scene of the crime. The purpose of this system is to give augmented reality help to first responders who may be less qualified to work on a fresh crime scene.

To illustrate how it works - let’s say a police officer shows up at the scene of a crime of death due to suspected poisoning. Does he have any clue as to which piece of evidence is going to be the most useful for investigation? Suddenly, a virtual arrow appears, pointing out to a bottle, with an attending message which reads “Bag this please”. How and from where is this coming?

When the police officer at the scene is exploring the area, footage from his shoulder camera or Hololens is conveyed to forensic scientists or crime specialists at different locations. These remote colleagues add information and notes ranging from a request to explore a particular area with a big arrow or by directing him/her to bag some item as a piece of evidence on to the officer’s AR view which could be a head-mounted device like Google Glass.

Osterhout Design Group (ODG) San Francisco, USA has designed a pair of AR smart glasses called R7 which would be vastly useful for law enforcement, crime detection, Special Ops and traffic enforcement. These glasses have Imagus Advanced Biometric Face Recognition Technology software which gets turned on when the police officer makes contact with a person.

The software identifies the person by comparing him with the database and provides information such as name, address, contact information, criminal history and pending warrants. It can also identify license plates of the vehicles, help an officer see in the dark, and has an Explosives and Narcotics Residue Alert Module (ENRAM) which emits an array of 12 lasers capable of detecting explosive or narcotic residue on a person or object. During the trial in the court, R-7 Smartglasses can also help an officer to do a walk-through of any crime scene in full 3-D.

The high tech glasses can take a picture and run it through a central database to reveal who they're looking at and what that person is up to. The data which the glasses reveal is not just confined to a person’s criminal record and last known physical address but it also reveals the hotel where the person is staying as well as the details about his recent Internet usage.

Which is why it isn’t too surprising that the New York Police Department (NYPD) is exploring what it can do with Google Glass, to bring augmented reality to the cop on the beat. NYPD has got a few pairs of Google Glasses, and they are being tried out for investigations, mostly during patrols.

The cost of Google Glasses are approximately one lakh rupees or $ 1500 and upwards depending on the model. Police in India and Tamil Nadu can improve tremendously if AR glasses or devices such as R7 are deployed in day to day policing. Here's an illustration of how the deployment of AR glasses would tremendously help a policeman while on beat duty.

When a policeman on a night beat duty wearing odd-looking AR glasses, comes across a man on the street, almost instantly, the facial recognition system embedded in his glasses kicks-in, identifies him, retrieves all the information available about him from his database including his past criminal history, as well as pending non-bailable warrants, driving violations etc.

Simultaneously, a combination of sensors gets turned on which silently unleash an array of infrared and other rays which scans the stranger's body and informs the beat constable whether or not he is carrying any dangerous weapon or contraband on his person.

If the sensors happen to detect and inform the policeman that the stranger is carrying just a purse and a mobile phone in his pocket and nothing resembling a gun the policeman can simply ignore the stranger and allow him to walk through as no purpose would be served by checking and frisking him.

As the AR technology matures, police forces are going to desperately want this technology. The job of law enforcers would become so much easier if they are able to identify each and every person as either a law-abiding civilian with a clean record or a potentially dangerous criminal who deserves a second look.

Imagine a scenario, where a policeman is chasing a chain-snatching accused who happens to runs into a Metro Station, whereupon the policeman would be able to see the blueprint of the entire Metro station along with CCTV feed of the station overlaid over his glasses making it a child's play for him to locate the criminal.

Similarly, if the police receive a 100 call where a suspect is wielding an arrival at a school, when the police reach the place, the facial recognition system in their glasses will quickly scan and identify him, and also reveal from his personal history that the particular person is a mentally deranged person, allowing the police to deal with him differently without shooting him down .

AR also comes with negative aspects or downsides. By hacking into it, AR can be used to commit crimes by overlaying misleading incorrect displays. For instance, car drivers relying on it could be made to cause accidents by misdirecting them into wrong lanes, showing incorrect speed limits and fake traffic signs.  Malicious crimeware such as Blackshades can be created by hackers which can snoop into all our screens including our passwords in our homes and offices through our mobile phones or Google Glass.

Quite as how the greatest rapper of all time Notorious B.I.G belted out “Mo Money, Mo Problems”, Mo screens are going to mean Mo problems. Screens will soon become ubiquitous, we will have them on our wrists, contact lenses, refrigerators, tables, bathrooms, walls practically everywhere. In fact, every possible flat surface will be transformed into an interactive screen, each serving as a filter for our reality, easily manipulated by those whom we allow interpreting the real world for us.

The global information network that we are all increasingly tapped into and dependent on is deeply vulnerable. The technological bedrock on which we are constructing the future of humanity is abysmally weak and like a house of cards can come crashing down at any moment.

There is a storm gathering before us, and all the signs of disaster are imminent. The problem is that reality-altering technologies such as AR will open the door further to even more immersive virtual environments, such as virtual reality systems, which can be debased and abused by criminals, terrorists or rogue governments detrimentally to exploit and destroy the general public.

Then there is also the danger of too much immersive technology causing one to forget one’s spiritual nature. The digital and virtual may soon drown out the real. In a world where, sometimes, we cannot see the difference between reality and a created reality, we may have to stop and wonder how our future might look if technology continues to lean towards augmenting our reality. In a world where our reality is heavily augmented, soon the computers may think for us, do for us, feel for us and even fill our spiritual void. Eventually, will we even need our human mind and the soul?