The police kept the minors, named in the FIR, in the police station for almost 4 hours. 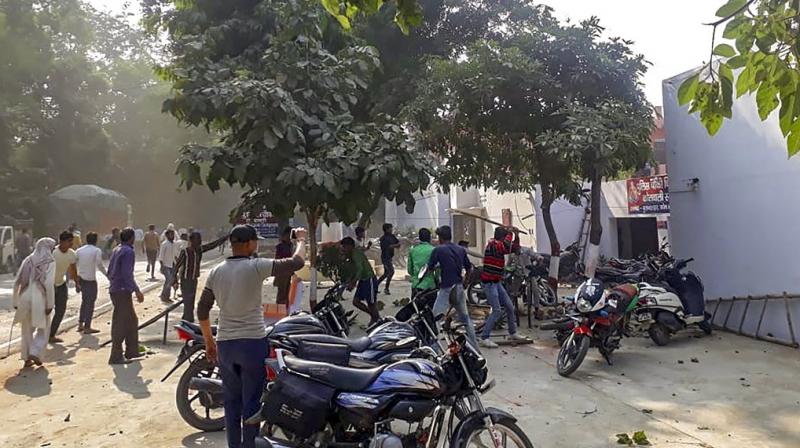 A case was filed over cow slaughter allegations which sparked the violence that led to the murder of a police officer and a local youth in Uttar Pradesh's Bulandhshar. (Photo: PTI)

Bulandshahr: Two minors, 11 and 12, are among seven who have been named as accused in a case filed over cow slaughter allegations which sparked the violence that led to the murder of a police officer and a local youth in Uttar Pradesh's Bulandhshar, reports said.

The team of police occupied a central position in the cluster of Muslim houses and called out the names, one at a time.

The names of the two boys, who are cousins, matched with the ones called out by the police. While the other five names in the complaint of cow slaughter filed after carcasses were found strewn around in a forest near Nayabans village in Bulandshahr were either not the residents of the village or were not present in the village at that moment. The complaint also mentioned the names which the villagers have never heard.

The complainant was filed on the basis of a statement by Yogesh Raj, who is a Bajrang Dal’s district head and is named as the main accused in a separate FIR over the killing of police officer inspector Subodh Kumar Singh during Monday’s mob violence.

Yogesh Raj is missing since the incident. He was seen in a video arguing with the police and demanding action against cow slaughter, minutes before a mob attacked policemen, burnt the police outpost and set vehicles ablaze.

The Nayabans village is shocked that children have been named for cow slaughter. The father of one of the boys said they were not even in the village on the day of the incident.

"The police came to our house, called us to the police station and kept us there for four hours. They took the names of the boys and took my phone number. I was told we should be called again if required," NDTV quoted the father saying.

For the two minor boys, it was nothing less than a traumatic experience. "We hardly spoke there. I was not feeling well. I had never been inside a police station before. After my uncle said that we were younger than 18, he was asked to get our Aadhaar cards to confirm the age," news18.com quoted one of the minors saying.