To mitigate plight in face of nature’s fury 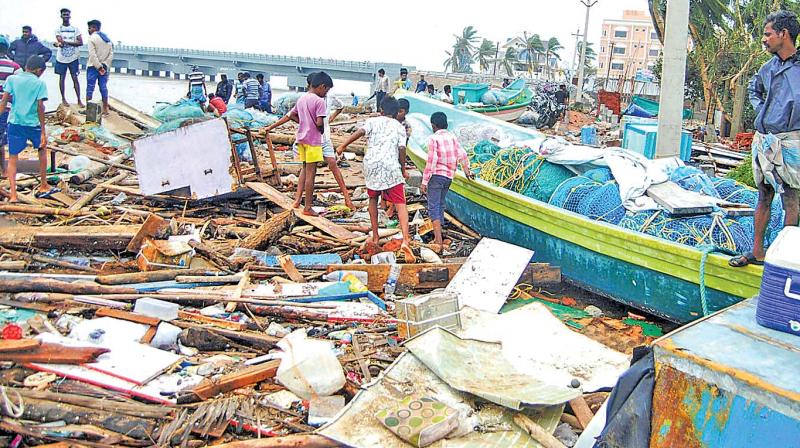 The Ockhi storm raged in 2017 killing at least 218 people in southern Tamil Nadu and Kerala and now Gaja came with the force of a herd of elephants on the march in 2018.

Natural disasters have become customary visitors to Tamil Nadu. As climate events get more and more extreme, the State, with a long coastline exposed to the vagaries, seems to be hit with a sickening regularity. The floods seemed biblical in 2015, the Vadhra storm blew through the capital and right over the harbor in 2016, the Ockhi storm raged in 2017 killing at least 218 people in southern Tamil Nadu and Kerala and now Gaja came with the force of a herd of elephants on the march in 2018.

It is a frightening thought that Tamil Nadu seems doomed to dealing with natural calamities every year without fail. It should not, however, be so dispiriting considering 2018 had earlier left a trail of destruction in the floods in Kodagu and, even more extensively, all over Kerala. But the point is Tamil Nadu has to be more prepared to put in sustained work to save its people living along the coastal districts because it is more than likely it will be dealing with greater servings of nature's fury than its neighbours with their shores on the Arabian Sea.

The Bay of Bengal may be a bay of woes but that is reality. The world over, people are suffering from extreme weather and climate events. To the east, Sydney was flooded this year while the Atlantic and Caribbean hurricane season proved destructive enough once again. There is no escaping the fact that preparedness has to be of a different scale altogether if the people as well as their livelihoods are to be protected from the vicissitudes of climate change.

It must be a rum year in which Chennai must be facing a drought-like situation with rainfall giving it a big miss this northeast monsoon, which most pundits said would be plentiful in its bounty. On the other hand, the four southern coastal districts have been battered beyond belief by the direction changing Gaja, which fooled its mappers by looping the loop and doubling back with U-turns and what not to pummel at least six districts, most of all Thanjavur, Tiurvarur and Nagapattinam districts with such gale force as to cause unbelievable damage.

Sitting in dry Chennai, we may have failed to notice the havoc wreaked by the cyclone named by the Sri Lankan weather watchers as it was their turn to name these beasts. The pachyderms are cute when bathing in their Pinnawala nursery on the road to Kandy from Colombo. The storm named after them seemed to have taken their massiveness seriously. The pictures coming out of the storm-ravaged districts tell the tale with a series of flattened coconut trees that would bring a tear to the eyes.

The devastation caused to coconut farms is still being examined with well over a million trees felled. It is heart rending to hear that farmers who gave up paddy and other crop cultivation because of the difficulties with finding water regularly for irrigation that they switched to the less water-greedy coconut palm for their livelihood. The destruction of their resource is hard to take, so too their story of how it may take 10 more years for the trees to bloom with coconuts for them to see any money to eke out their livelihood. And what would they do in the interim decade after planting new trees or repairing some slanted ones with scaffolding?

Hundreds of fishing boats anchored in protected shallow waters or stationed on the beach were torn apart as if they were toys. Thanks to precautions taken in advance on monsoon warnings that were somewhat plentiful as weather watchers were proactive in their predictions, there was minimal loss of life. But the havoc caused to housing has been so extensive that it is no more a mere concept to provide people on the rural coast with concrete housing. Much more than the wave of housing that came up in the wake of the Tsunami of 2004 has to be attempted if people are not to be rendered destitute by every annual storm that blows by the Coromandel Coast.

The interim relief from the Centre is a laughable 353.70 crore, which would hardly serve to compensate the crops lost, leave alone the long-term threat to livelihoods in terms of the around 11 lakh coconut trees lost. The State would have to act on the premise that the final dole from the Centre would be minuscule compared to the damage wrought to dwellings, crops, boats and livelihoods. The only way out would be to devise a system by which money could be put away for dealing with natural calamities that occur virtually every year in the form of tropical storms, leave alone seasonal droughts that could have as disastrous an effect on any kind of agriculture.Would the government be prepared to slap a tax on liquor in order to build up a corpus for dealing with disasters? This would go beyond viewing tax on liquor as a sin tax as the tippler would be paying his mite towards relief for those who have no way of saving their livelihoods. Why, even a half per cent add-on in GST on goods sold in the State would help in corpus building. In this way, everyone who so much as buys so much as a toffee would also be contributing to assuage the plight of the hapless human being in the face of Nature's fury.

(R. Mohan is the Resident Editor of the Chennai and Tamil Nadu editions of Deccan Chronicle)