After 106-day custody, P Chidambaram walks out of Tihar 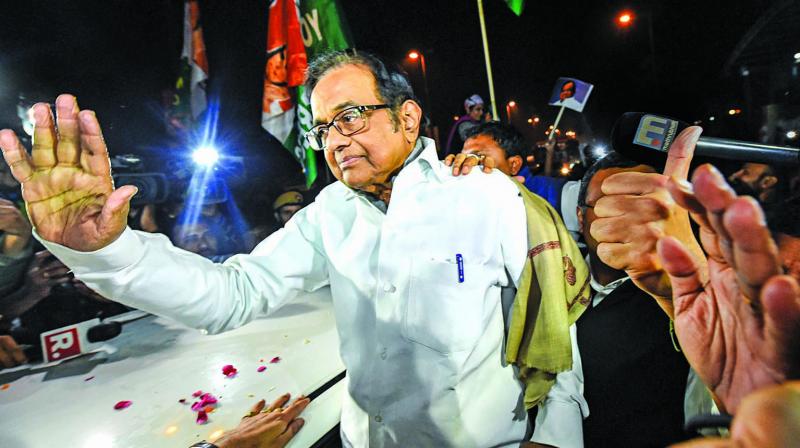 Senior Congress leader P. Chidambaram waves at Congress workers and supporters after he was released from Tihar Jail in New Delhi. (Photo: PTI)

New Delhi: After spending 106 days in custody, former finance minister Palaniappan Chidambaram walked out of Tihar Jail on Wednesday after the Supreme Court granted him bail in the INX Media money-laundering case that was being investigated by the Enforcement Directorate.

The former minister had earlier been granted bail by the Supreme Court on October 22 in the corruption aspect in the case that was investigated by the CBI.

Granting Mr Chidambaram bail in the money-laundering case, a bench of Justices R. Banumathi, A.S. Bopanna and Hrishikesh Roy said that while on bail he “shall not tamper with the evidence or attempt to intimidate or influence the witnesses”. Mr Chidambaram’s age (he is 74), his medical condition — including his suffering two bouts of illness in custody and being put on antibiotics and advised to take steroids of maximum strength — too weighed in the grant of bail. Noting that Mr Chidambaram was not a flight risk, could not tamper with evidence nor influence witnesses and the fact that his alleged complicity in the offence was yet to be established before the trial court, the court said Mr Chidambaram “in our considered view is entitled to be granted bail”.

The court further noted Mr Chidambaram has not been named in ECIR of the ED and on the allegations against Kartti Chidambaram it is indicated that P. Chidambaram, who was then finance minister, had allegedly aided the illegal transactions as Karti Chidambartam is his son.

In this context, the court said, even if the statements on record and materials gathered are taken note of, the complicity of the appellant will have to be established in the trial, and if convicted, he will undergo sentence.

It further noted that after the rejection of anticipatory bail by the Supreme Court on September 5 in the case being investigated by the ED, Mr Chidambaram was available for custodial interrogation for more than 45 days.

Speaking for the bench, Justice Bopanna, pronouncing the judgment, said they were not inclined to look into the material given in a sealed cover by ED, as a single judge of the Delhi high court had perused the same and arrived at certain conclusions, and since it was being challenged, “we had to look into it to satisfy ourself”.

The court said the high court’s single judge was “not justified” in arriving at the findings which it did “based on the material” made available to him by the ED in a sealed cover.

“Hence, in our opinion, the finding recorded by the learned judge of the high court based on the material in the sealed cover is not justified”, the Supreme Court bench said.

Directing the release of Mr Chidambaram on furnishing a bail bond of Rs 2 lakhs and two sureties of like amount, the court said that he would not make any public comment or give any interviews in connection with the case. Mr Chidambaram was directed to make himself available for interrogation as and when required by the ED and would not leave the country without the approval of the special ED court holding the trial in INX Media money-laundering case.