'After 106 days, not a single charge framed against me': P Chidambaram

Chidambaram was first arrested by CBI on August 21 in INX Media case and was granted bail on October 22. 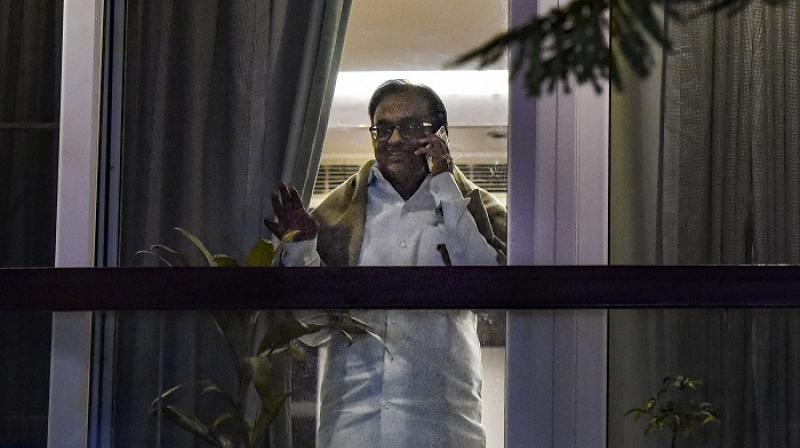 Dressed in his trademark long-sleeved white shirt and dhoti, Chidambaram was surrounded by a posse of newsmen and photographers. (Photo: PTI)

New Delhi: After spending 105 days in Tihar jail, Congress leader P Chidambaram was released on Wednesday evening, after the Supreme Court granted him bail in the INX media case.

A three-judge bench, headed by Justice R Banumathi, granted bail to the 74-year-old former Union finance minister who has been in custody since August 21 when he was arrested by the CBI.

Dressed in his trademark long-sleeved white shirt and dhoti, Chidambaram was surrounded by a posse of newsmen and photographers.

"After 106 days of incarceration, not one charge has been framed against me," said Chidambaram after leaving jail.

Later, Chidambaram met Congress chief Sonia Gandhi after leaving the prison. "I am happy that the Supreme Court has passed an order granting bail and I am happy that I have stepped out and breathing the air of freedom after 106 days," he said.

Congress workers gathered outside the prison to greet Chidambaram on his release and they chanted slogans saying, "Dekho dekho kaun aaya, sher aaya sher aaya (Look who has arrived, the tiger has arrived)", and "Jail ke taale toot gaye, Chidambaram ji chhoot gaye' (The locks of prison have broken, Chidambaram ji is finally out)."

His son Karti Chidambaram, who was waiting outside the jail said: "It has been a long wait. I am very grateful that the Supreme Court has given him bail. I am very grateful to entire top Congress leadership, including Sonia Gandhi, Manmohan Singh, Rahul Gandhi and Priyanka Gandhi Vadra who have supported him through all this."

Former Congress chief Rahul Gandhi said Chidambaram's incarceration was "vengeful and vindictive", while expressing confidence he would be able to prove his innocence in a fair trial.

Chidambaram was first arrested by the CBI on August 21 in the INX Media corruption case and was granted bail by the top court on October 22. The ED had arrested him on October 16 in the money laundering case.

The CBI registered its case on May 15, 2017, alleging irregularities in a FIPB clearance granted to the INX Media group for receiving overseas funds of Rs 305 crore in 2007, during Chidambaram's tenure as finance minister. The ED afterwards lodged a money-laundering case.