India   All India  05 Dec 2019  Delhi and Male to enhance security in Indian Ocean
India, All India

Delhi and Male to enhance security in Indian Ocean

Expressing his appreciation, Maldivian President Solih conveyed his commitment to deepen cooperation and partnership with India. 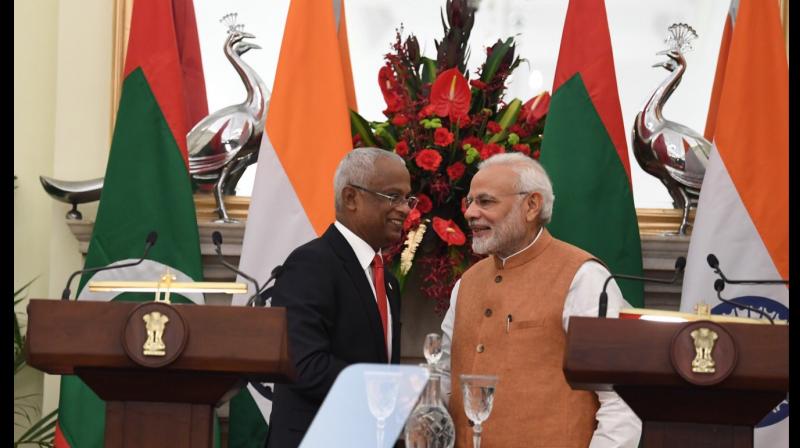 New Delhi: Four bilateral grant projects in the Maldives were highlighted by India on Wednesday at a Digital Video Conference (DVC) between Prime Minister Narendra Modi and Maldivian President Ibrahim Mohamed Solih  which included “installation of LED streetlights in Male” that “will also add to the safety and security of the residents of Male, particularly women and children”. This ironically comes at a time when there is a raging debate in India over the need for streetlights at night and safety of women. The four projects “represent the breadth and ambition of the development partnership between India and the Maldives”.

While it is well-known that India has been concerned about growing Chinese military and economic presence in the region, it is significant that during the DVC, “both leaders (PM Modi and President Solih) agreed to work closely together to enhance cooperation for peace, prosperity and mutual security of India and the Maldives and for the wider Indian Ocean region”.

The DVC was organised to “launch some of the important initiatives (by India) that were announced during last one year” and comes even as India is battling Chinese influence in almost all of its neighbouring countries. At the DVC, PM Modi “spoke of India’s steadfast commitment to the socio-economic development of the Maldives in line with the priorities of the people and government of the Maldives”

Expressing his appreciation, Maldivian President Solih conveyed his commitment to deepen cooperation and partnership with India.

The four key initiatives are the gifting of a “Made in India” patrol vessel named “KAAMIYAAB” to the Maldives National Defence Force, exchange of MoUs for 3 grant projects for setting up neighbourhood fish plants, ex-change of an MoU bet-ween National Payments Corporation of India and the Bank of Maldives to launch the RuPay card in the Maldives, and “installation of LED streetlights in Male” that “will also add to the safety and security of the residents of Male”.

It may be recalled that in June, PM Modi had visited the Maldives which was the first nation to be visited by him after he returned to power in the Lok Sabha polls in May. Under Maldivian President Solih, India and the Maldives are now the closest of friends once again. PM Modi had in November last year attended the swearing-in ceremony of President Solih. The Maldivian President has strengthened ties with New Delhi and reversed the widely-perceived slant towards Beijing that the Maldives had adopted during the controversial tenure of his predecessor Abdullah Yameen. President Solih’s assuming of office following his victory in the presidential polls against then President Abdulla Yameen last year had come as a huge relief for New Delhi. Mr Yameen was openly pro-China and had become a thorn in New Delhi’s flesh.

In a statement, the MEA said, “The Gifting of a ‘Made in India’ Patrol Vessel named “KAAMIYAAB” to the Maldives National Defence Force (MNDF). The brand-new vessel will be manned by 8 MNDF personnel trained in India and will be a valuable asset for Maldives in enhancing its maritime security, fostering its blue economy and safeguarding its tourism industry.”

The MEA further said, “Exchange of MoUs for 3 grant projects (are) for setting up neighbourhood fish plants in the southernmost atoll of Addu. Mindful of the geographic spread of Maldives and the development needs of its people, these High Impact Community Development Projects (HICDPs) will be implemented by the Addu City Council in Maldives. These projects are being implemented under the MoU signed during late Smt. Sushma Swaraj’s visit to Maldives in 2019 and will help support livelihoods of the island communities in the Addu.”

New Delhi also mentioned “exchange of an MoU between National Payments Corporation of India (NPCI) and the Bank of Maldives (BML) to launch the RuPay Card in Maldives”. The MEA said, “In 2019, tourist arrivals from India to Maldives have doubled and India has risen from 5th to the 2nd position in the tourism market of Maldives. The launch of the Global RuPay Card in Maldives through the Bank of Maldives will pave the way for higher tourist arrivals from India and, eventually, stronger people-to-people contacts between the two countries.”

The MEA added, “(Regarding) Installation of LED streetlights in Male, 2500 LED streetlights donated by India were installed in Male recently. These streetlights save 80% energy and will result in cost savings of approx. 8.35 lakh MVR per year for Male city. They will also add to the safety and security of the residents of Male particularly women and children.”