The festival was held in the old and grand Nelson Hays Library, an iconic British institution housing as many as 20,000 books! 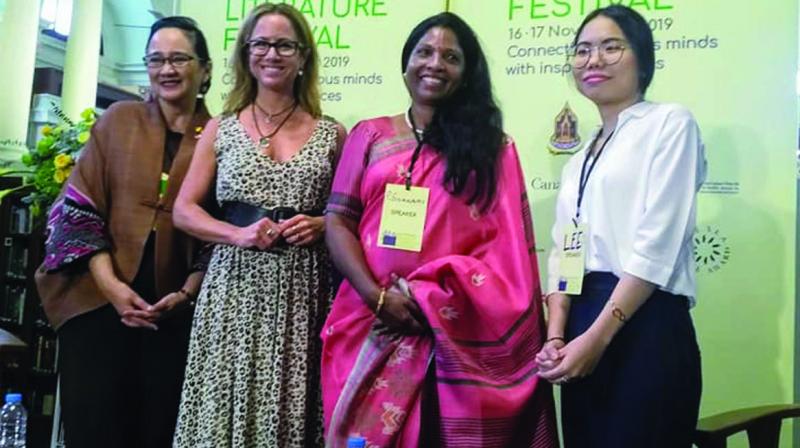 “We are so small next to the Jaipur Literature Festival, but we are excited to make a start!”
— Nalin Vanasin, president of Nelson Hays Library, organisers of the literature festival

Bangkok: A literature festival in Bangkok is very special, as there are not too many serious book lovers in the city. That’s why the first ever Bangkok Literature Festival was exciting and pioneering, even if it was a modest two-day event.

The festival was held in the old and grand Nelson Hays Library, an iconic British institution housing as many as 20,000 books! It has about 640 members, and a dedicated board of eight bibliophiles who run it.

In fact, the two-day festival was held to celebrate the 150th anniversary of the library, and most of the events were held in their wooden, book-lined library room.

Needless to say, the Jaipur Literature Festival was mentioned almost every day.

“We are so small next to them, but we are excited to make a start,” said Nalin Vanasin, the president of the Nelson Hayes Library. She informed that she worked with a small budget of two million baht and 40 volunteers (including many local Indians) for the event.

The festival had as many as 30 writers who came in through contacts and connections, as also support from cultural institutions.

Among these was the India Studies Centre of the well-known Chulalongkorn Varsity, who supported the trips of Indian writers P. Sivakami and Raghu Karnad to the festival.

The third Indian writer at the festival was Pankaj Mishra, who was invited by the festival’s consultant Nisid Hajari. The latter is a writer/journalist of Indian origin who lived in the US but now lives in Bangkok and has written a critically acclaimed book on India: Midnight’s Furies: The Deadly Legacy.

At a panel discussion which dealt with growing nationalism in many countries including India, the two writers admitted that India was going through troubled times.

“It is disturbing because it is an overwhelmingly young country!” said Mishra, adding, “Liberals are still a minority, and are identified as elitist”.

Outspoken Tamil writer Sivakami, who has propagated dalit literature to the forefront with her own numerous books, short stories and essays, was proud that there were as many as 100 dalit writers in Tamil Nadu alone. But she admitted that she had lost faith in governments, which was why she had resigned from her Indian Administrative Services job, as she felt she could do more for her community if she was out of the system.

The writer has been fighting for many causes, especially land acquisition for dalits, and spoke about it at the festival. She admitted that the late chief minister of Tamil Nadu, Karunanidhi, had allotted free land to the landless, but everything had stopped after his death.

“Democracy is about equality, but that doesn’t exist with the dalits,” she stated.

Raghu Karnad spoke at length about his essay The Ghost in the Kimono, which was interesting and enlightening, as it dealt with the little-known story of Japanese women who had been interred in the Purana Quila ramparts during World War II in 1942.

Dr Verita Sriratana, who teaches contemporary literature in Chulalongkorn Varsity, and who moderated the discussion with both the two Indian writers, commented about their works: “Sivakami’s work is a much-needed provokingly feminist re-writing of India’s canonical texts, most of which have laid the foundation of class and gender inequality for centuries.”

About Karnad, she stated: “He transcends the genre of memoir writing and historical fiction. The lines dividing these two are there, but are refreshingly rendered.”

Verita, who teaches Indian writing in English, informed that Arundhati Roy was a big favourite with her students.

The panel on Women’s Writing was made up of writers from Australia, India, Thailand, Myanmar, etc. Dr Ma Thida from Myanmar was jailed for her writings, but remains an activist. However, she confessed that with so many languages and dialects in Myanmar, “our community is divided, and we have no collective identity”. That’s why she did not expect anyone to help them, including Aung San Su Kyi.

Women writers Kanako Nishi from Japan and Kilin Yuri from Thailand spoke about writing on gay and lesbian issues.

In fact, an entire panel was devoted to LGBT issues, with various writers, including Darrel McLeod from an indigenous community in Canada, and well-known Thai academic Vitit Muntarbhorn, who spoke at length about their issues and conflicts. According to the latter, “Sex is biological, while gender identity is sociological”.

There was also a section for Children, with author Mike Curato, illustrator of the popular Little Elliott series creating live drawings and a story for them.

Among the other events at the festival was a play-reading from a drama about child abuse by well-known Singaporean-Indian playwright Haresh Sharma. It was interesting to learn from him that stage-plays were “cleared” in Singapore, not through censorship laws but a rating system.

There was also the screening of a thought-provoking docu-feature Hope Frozen about a family who kept their dead two-year-old child’s brain frozen in a cryptonic chamber in the US, with the hope of bringing her back to life. The screening was followed by a strong discussion on the sensational subject of the movie.

As for the Thai writers, the festival introduced the public to many of the country’s top poets and fiction writers. Among these was Zakariya Amataya, a Thai Muslim poet who studied in Aligarh Varsity, India, lives in the south of Thailand bordering on Malaysia and is more comfortable writing in the Malay rather than the Thai language. Writer Anusorn Tipayanon opted to leave Bangkok to live in the countryside of Isaan, as he felt “freer” to write there.

The Thai writers confessed that their biggest problem was getting their works translated into the English language.

That was why a debut novel Bangkok wakes to rain, written in English by Thai-American writer Pitchaya Sudbanthad, which was reviewed by the New York Times, received a lot of attention at the festival.

An interesting point made, right from the first day of the festival, was the way writing narratives had changed, with the advent of the mobile phone, that has become an important weapon of communication today.

Pankaj Mishra mentioned how Donald Trump had access to a huge range of followers due to the “alternative reality” of social media.

Bangkok’s maiden literature festival deserves credit for packing in a holistic range of literary activities at the city’s oldest and best book-haven, the Nelson Hays Library.

One sincerely hopes it will become a yearly phenomenon.