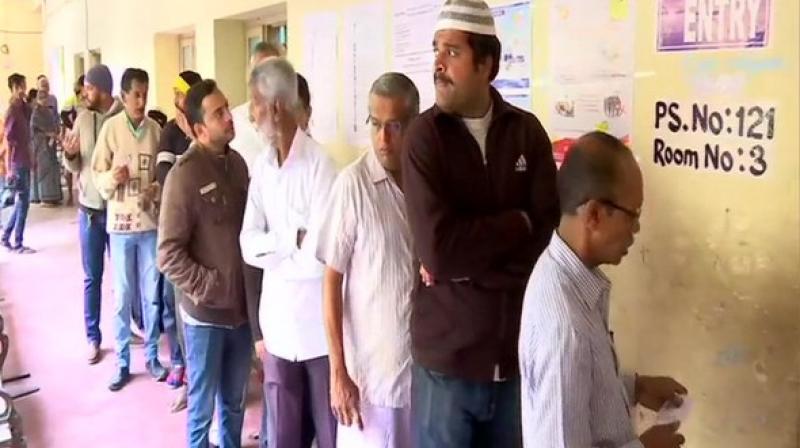 These by-polls are being considered very crucial for all three major parties contesting in these polls- BJP, Congress and JD(S). (Photo: ANI)

Bengaluru: Voting for 15 Assembly constituencies of Karnataka going to by-polls, began on Thursday morning at 7 am.

The polls on these seats were necessitated following the disqualification of 17 MLAs who had resigned from the Assembly in July over their differences with the Congress-JD(S) coalition government.

The elections for 15 out of 17 seats are being held on Thursday since the poll body had withheld the elections for two seats -- Maski and Rajarajeshwari -- as the petitions against these Assembly constituencies are pending in the Karnataka High Court.

These by-polls are being considered very crucial for all three major parties contesting in these polls- BJP, Congress and JD(S).

Apart from BJP and Congress which has fielded candidates in each of 15 seats, there are over 100 independents also contesting in these by-polls. JD(S) is contesting on 12 seats going to by-polls today.

In July, the Congress-JD(S) coalition government led by former Chief Minister HD Kumaraswamy had collapsed after 17 of its MLAs resigned. The resignations also reduced the majority mark in 224-strong Assembly to 104.

The BJP with its 105 MLAs formed the government in the state. Now with by-polls on these vacant seats, the majority mark would increase.

Elections for two other seats will be held in future which will take the majority mark to 113.

Ahead of the polls, former Karnataka deputy chief minister G Parameshwara had also said that there is a possibility of Congress-JD(S) alliance in Karnataka after the by-poll results.

In run-up to polls, section144, which prohibits an assembly of more than four people in an area have been imposed in the by-election constituencies which come under the jurisdiction of Bengaluru Comissionerate, including Mahalakshmi Layout, KR Puram, Shivaji Nagar and Yeshwantpura.

Earlier on December 3, Static Surveillance Teams (SSTs) seized cash worth Rs 42,00,000 ahead of polls in the state.

Around 323 Flying Squads and 578 SSTs were also activated in the state as part of poll preparedness.

The results of these by-polls will be announced on December 9.