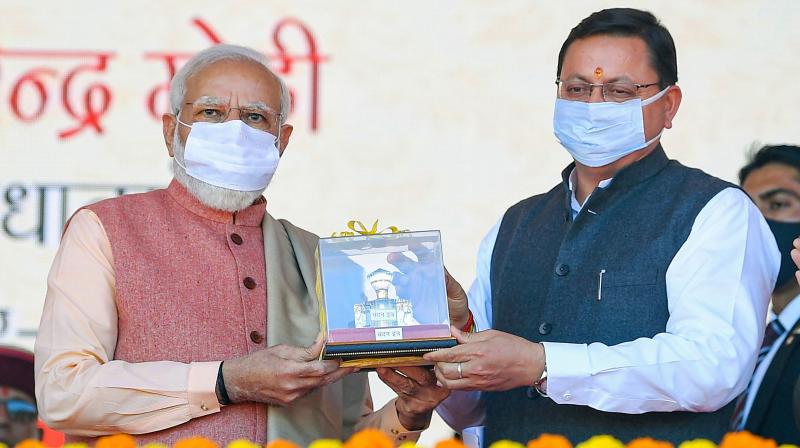 New Delhi: Sounding the poll bugle in Uttarakhand, Prime Minister Narendra Modi on Saturday said that unlike previous government, the BJP-led government at the Centre has chosen a “new and difficult path” in nation’s interest, one which does not serve any “particular caste or particular religion or a particular region for vote-bank politics” but empowers people, with the motto "Sabka Saath Sabka Vikas (With all, development for all).” Addressing a rally in Dehradun after laying foundation stone and inaugurating development projects worth more than Rs 18,000 crore, Mr Modi also took an apparent dig at the state's main Opposition party, Congress, saying those who are disintegrating everywhere cannot develop Uttarakhand.

The development projects include the Delhi-Dehradun economic corridor which is likely to cut the travel time between the two cities from six hours to two-and-a-half hours, Asia's biggest elevated wildlife corridor and a new bridge as an alternative to Rishikesh's iconic Lakshman Jhoola.

Mr Modi started his speech by greeting people in Garhwali language and ended the speech by reciting a poem dedicated to the hill state.

Chief minister Pushkar Singh Dhami, Union ministers Pralhad Joshi and Ajay Bhatt, state ministers Satpal Maharaj, Harak Singh Rawat, former union minister Ramesh Pokhriyal Nishank and former CMs Tirath Singh Rawat and Trivendra Singh Rawat among others shared the dais with the PM, who was offered "gangajal" by saints and seers of Chardham for the Dhami government’s decision to scrap the controversial Chardham Devasthanam Board. Mr Modi was seen patting the back of Mr Dhami, whose elevation to the CM’s post had miffed many senior leaders in the state BJP.

"We bring development projects for the benefit of all, irrespective of their caste or religion. We don't believe in using a particular community, caste or religion as a vote bank. We work for the empowerment of all," said the PM as he asserted that only a “double engine” government can continue the flow of development in the state, which was neglected by the previous UPA government for 10 years.

Asserting that the BJP believes in empowering people, Mr Modi said some perversities have entered the country's polity where some parties believe in keeping people weak so that their dependence on them never ends and their "crown" remains intact. He alleged that efforts launched in the field of connectivity and infrastructure development by the then Prime Minister Atal Bihari Vajpayee at the beginning of the century came to a halt during the 10 years of UPA. He also repeated his statement, which he had made during his last visit to the Kedarnath, that “this decade belongs to Uttarakhand.”

He said the Centre had sanctioned projects worth over Rs 1 lakh crore for Uttarakhand over the last five years and the state government is working on a war footing to implement them as fast as possible.