CBI court that had convicted Lalu on Dec 23, also imposed a Rs 10 lakh fine on him for two cases in the scam. 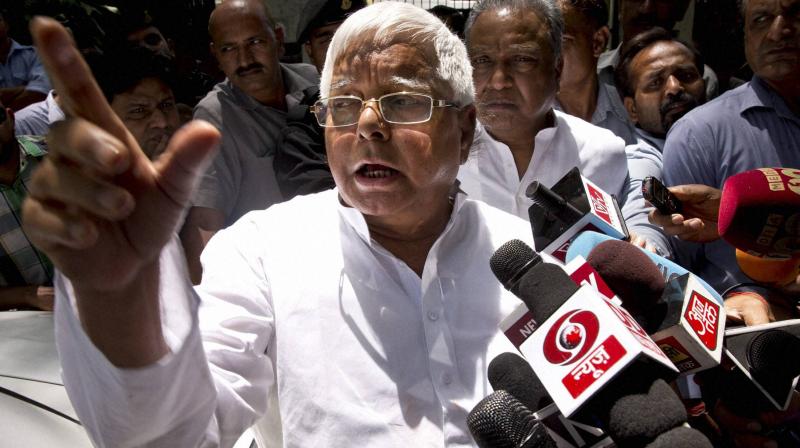 The court had convicted RJD chief Lalu Prasad Yadav for offences of cheating, along with criminal conspiracy, under the Indian Penal Code (IPC) and the Prevention of Corruption Act. (Photo: PTI)

Ranchi: RJD chief Lalu Prasad, on Saturday, was sentenced to three-and-a-half years in jail by a CBI special court in a fodder scam case relating to fraudulent withdrawal of Rs 89.27 lakh from the Deoghar Treasury 21 years ago.

CBI court judge Shiv Pal Singh, who had convicted Prasad, along with 10 others on December 23, also imposed a fine of Rs 10 lakh on him for two cases in the scam.

He was fined Rs 5 lakh for each case, failing which he would serve another six months in jail, a CBI counsel said.

The court had convicted Prasad for offences of cheating, along with criminal conspiracy, under the Indian Penal Code (IPC) and the Prevention of Corruption Act.

Judge Shivpal Singh pronounced the quantum of sentence for Lalu Yadav and other accused, via video conferencing.

Soon after the punishment was announced by the court Lalu Yadav twitter account said: "Rather than practicing BJP’s Simple Rule - 'Follow us or We will Fix you'. I will die happily fixing myself for Social justice, harmony and equality."

Rather than practising BJP’s Simple Rule - “Follow us or We will Fix you”. I will die happily fixing myself for Social justice, harmony & equality.

The RJD went into a huddle immediately after the pronouncement of the sentence.

Addressing media after the verdict, Lalu's son and former deputy chief minister of Bihar Tejaswi Yadav said that the party (RJD) would move the High Court after studying the sentence and apply for bail.

Lalu's son Tej Pratap said: "We are confident that he (Lalu Yadav) will get bail. We have full faith on judiciary. We are not going to be cowed down."

Meanwhile, Janata Dal (United) leader KC Tyagi welcomed the judgement of the court. "This will prove to be a historic decision in Bihar politics. It is the end of a chapter," Tyagi said.

The scam is related to withdrawal of Rs 89.27 lakh from the Deogarh Treasury between 1990 and 1994 when Prasad was the chief minister of Bihar.

The 69-year-old RJD chief, in a written plea on Friday, had sought leniency from the CBI court citing illness and old age, according to his counsel Chittaranjan Prasad.

This is the second fodder scam case in which Lalu Prasad has been jailed.

Prasad was granted bail by the Supreme Court after having spent over two-and-a-half months in jail.

(With inputs from PTI.)