A breeding recession among silk worms is presently reducing productivity. 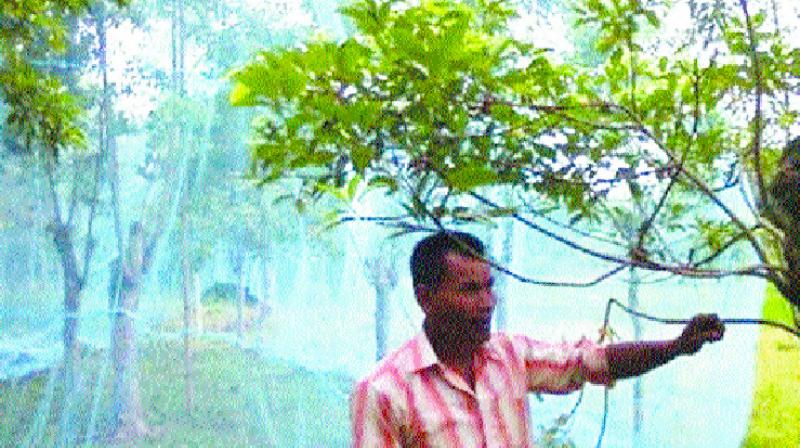 A farmer attends to muga silk worms in the wild in Assam.

Guwahati: To overcome the threats of climate change on muga crop, the Central Silk Board has embarked upon an ambitious plan to develop new muga silk worm breeds in Assam by promoting research in the area of genetic engineering.

The new breeds are to be developed in a manner that they can withstand the adverse impacts of soaring temperature, caused by the climate change. The Northeast is the only region in the world which produces all commercially known silks such as mulberry, eri, muga, tropical tussar and oak tussar.

In this regard, Assam, which has been granted a geographical indication certificate, is the only producer of the unique muga or golden silk.

It is significant to note that muga silk (muga paat) or the golden silk is not only a nature’s gift to Assam, but also a symbol of rich Assamese culture. It represents the brilliance of traditional attire of the region. The most significant characteristic of muga silk is its golden bright hue.

Pointing out the impact of climate change on muga crops of the state, sericulture director Muktanath Saikia said, “Since muga has no second breed, it is also facing breeding recession, which is reflected in its reduced productivity. There is, hence, a need to develop new breeds of muga.”

To achieve this objective, the sericulture directorate has set up a wild muga sanctuary. It is significant to note that muga worms are still bred and reared in the wild; they are yet to be domesticated.

Presently, there are five cocoon banks — one each at Boko, North Lakhimpur, Udalguri and Sualkuchi. They are run by the sericulture directorate, while the fifth one at Sivasagar is run by the Central Silk Board.

Also, the directorate has proposed to set up five more cocoon banks at Dibrugarh, Biswanath Chariali, Nagaon, Silchar and Dhakuakhana within March 2018, he said. The idea was to promote muga as one of the major economic activities for the farmers in the state, Mr Saikia added.

A wild sanctuary has been set up at Daigrung reserve forest in Golaghat district, adjacent to famous Kaziranga National Park (KNP). This sanctuary is expected to infuse new blood to the muga crops and help in overcoming their inbreeding recession problem, research scholars involved in developing the new breed said.

Stating that muga farming has largely remained a part-time work,  Mr Saikia said that plans were afoot to convert it (muga farming) into a full time job.

He said that the minimum support price (MSP) meant for checking distressed sale frequently forces farmers to sell their co coons at throwaway prices. So it has been decided that the directorate’s officials will purchase the cocoons at MSP.

Stressing the need for value addition, he said that to make muga farming a sustainable business for youths, there was a need to develop a mechanism for a minimum support price and cocoon banks. Apart from developing the new breed, the board is implementing several programmes for development of sericulture industry in northeastern states, including the Northeast region textile promotion scheme, a Rs 819 crore project for support in research and development, technology and marketing of textiles.