Masked men on rampage at JNU

JNU Students Union president Aishe Ghosh, who was injured in the violence, said she was attacked by “goons wearing masks”. 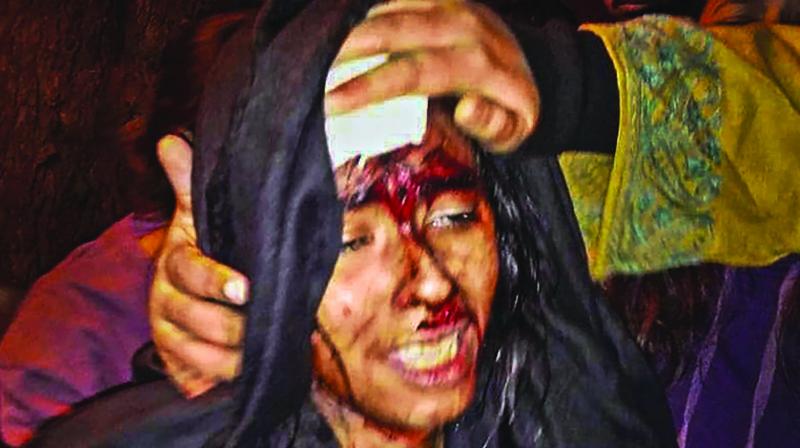 New Delhi: At least 30 students and teachers were injured during a clash which broke out between members of the Jawaharlal Nehru University (JNU) Students’ Union and the RSS-affiliated Akhil Bharatiya Vidyarthi Parishad (ABVP) on the university campus on Sunday evening. The clash reportedly erupted during a public meeting organised by the JNU Teachers’ Association. It was at the request of the JNU administration that the Delhi police entered the campus late in the night to track down the miscreants and also conducted a flag march.

Witnesses said about 50-odd goons, wearing masks and armed with rods and hammers, barged into the hostels around 6.30 pm. They reportedly indulged in stone-throwing and started beating students and teachers. Even students in the girls’ hostels were attacked.

The JNU administration said the masked miscreants armed with sticks were roaming around on the campus, damaging property and attacking people, prompting it to call the police to maintain law and order. After violence broke out on the campus, JNU registrar Pramod Kumar said in a statement: “This is an urgent message for the entire JNU community that there is a law and  order situation on the campus. Masked miscreants armed with sticks are roaming around, damaging property and attacking people. The JNU administration has called the police to maintain order... This is the moment to remain calm and be on alert... Efforts are already being made to tackle the miscreants.”

A professor, Atul Sood, said the mob threw huge stones and entered the hostels, vandalising property.” He said: “These were not small stones, these were big stones that could have broken our skulls. I fell on the side and when I came out, I saw cars completely vandalised, including my car.”

Accusing the ABVP of working in tandem with outsiders who arrived armed on campus, Saket Moon, vice-president of the students’ union, claimed the mob went from one room to another, “indiscriminately attacking students”. All through, he claimed, the security guards remained “mute spectators”. Terrified students were also seen phoning professors for help.

JNUSU, has claimed some “masked” persons entered the JNU’s Sabarmati and other hostels and thrashed students with sticks and rods. The students’ union has alleged that the attack was orchestrated by the ABVP. It alleged that ABVP “goons” pelted stones and vandalised property at Sabarmati hostel. “The ABVP attackers, with covered faces, are trying to enter Periyar Hostel by climbing the pipes,”  the JNUSU said on Twitter.

The ABVP has, however, alleged that members of the organisation protested against the disruption of Internet, after which they were attacked by members of the Left Unity.  The ABVP claimed its members were brutally attacked by students affiliated to Left student outfits SFI, AISA and DSF.

“Around 25 students have been seriously injured in the attack and there is no information about the whereabouts of 11 students. Many ABVP members are being attacked in hostels and the hostels are being vandalised by Leftist goons,” the ABVP said.

Hashtagged “#EmergencyinJNU” and “#SOSJNU”, a tweet from the students’ union’s official handle read: “Professors who were trying to protect us have been beaten up. These are unknown ABVP goons, not all are students, they have covered their faces, and they are moving towards the hotels near the West Gate. Stay alert. Make human chains. Protect each other.”

Late on Sunday night, groups of JNU students protested outside the Delhi police headquarters as Union home minister Amit Shah spoke to police commissioner Amulya Patnaik to take stock of the situation. A joint CP-rank officer will be asked to investigate and submit a report.

JNU alumnus and Union ministers S. Jaishankar and Nirmala Sitaraman have condemned the violence inside the JNU campus unequivocally. Some students claimed former DUSU president Satender Awana, from the ABVP, had also been seen on the campus.