According to him, depressed mental state is a harbinger of cancer, heart disease and even death. 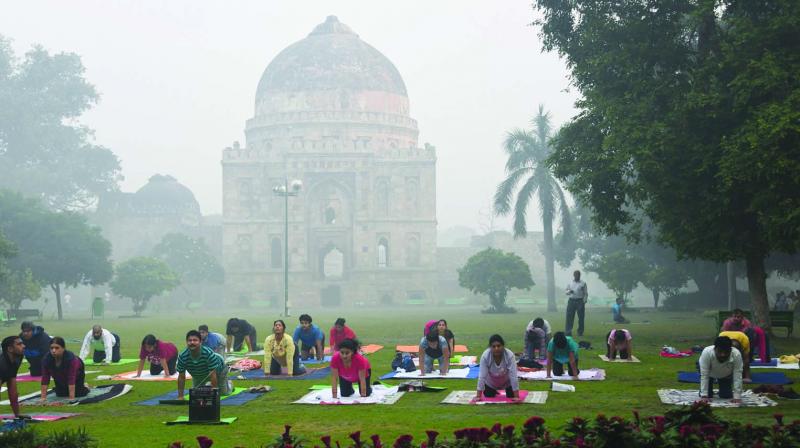 US-based renowned cardiologist Dr Indranill Basu Ray on Sunday asserted that yoga is the best way to beat depression, which has become biggest killer disease in the recent past in the country.

Bengaluru: US-based renowned cardiologist Dr Indranill Basu Ray on Sunday asserted that yoga is the best way to beat depression, which has become biggest killer disease in the recent past in the country.

Speaking at the Yoga Science conference as part of the 107th Indian Science Congress here, Dr Ray, quoting Swami Vivekananda, said, “To every action, there is an equal reaction. If a man strikes me and wounds me, it is that man’s action and my body’s reaction. Suppose I have so much power over the body, I can resist even that automatic action.”

He said that yoga philosophy incorporates the senses, the intellect, the ego and the body into one whole reality. “It suggests that our misery and our happiness are our own productions. Everything is in the senses. It is the touch of the senses that creates pleasure or pain. If we can control our senses and order what we shall feel, without letting them control and have command over us, if they become our servants, then the problem is solved. Our senses make us experience the world and mastery over them is the key to successful living, which can happen with mindfulness attained by yoga,” he explained.

According to him, depressed mental state is a harbinger of cancer, heart disease and even death.

“It is something that you just cannot entertain. It is like having a small porch in front of your house where instead of growing flowering trees, you are planting weeds. The same it is with the brain. The one organ in your body that defines who you are. You cannot afford to cultivate any negative thoughts as your thoughts will create your physical reality,” he contended.

The heart surgeon said that little or nothing of what we traditionally call “mind” is thoroughly understood. “In particular, the idea that the mind and the body have a medically significant relationship — where the state of the mind controls the wellbeing of the body — is relatively new to Western medicine.

However, this concept has been an integral part of Ayurveda, a traditional Indian medical science, for ages. Ancient texts, including the Vedas, Upanishads, and other scriptures considered to be the fountainhead of Indian philosophy, propounded this principle. Practicing physicians and surgeons of ancient India, like Charaka and Sushruta, emphasised the importance of the right mental state for healing. They proposed that the state of one’s mind governs the entire existence of the human being, including physical health. The nearest that Western medicine has come to this concept is in the study of the origins of certain diseases – called psychosomatic illnesses – where mental states like fear, anger, and anxiety can cause disease,” he said.

He said that yoga can intricate mind-body links, in which emotions directly affect the body function, have not been scientifically palatable to human biologists until recently. “In the past few decades, an explosion of scientific explorations that support the contention that mental states like happiness and sadness have a direct consequence on the body’s ability to fight diseases, has occurred,” the noted surgeon claimed.

He said that modern science is beginning to pay attention – as evidenced by the use in advanced medical clinics of visualisation, meditation, relaxation techniques, and other ways of activating the power of the mind. “Promising results with a variety of diseases, for example, hypertension, cancer, irritable bowel syndrome and asthma have been documented. Inappropriate mental activity including rage, anger and hatred can cause a propensity for heart diseases, including increasing blood pressure and heart attack. It is indeed a fascinating story to learn how the perception of the human brain, visualised by Western medicine to be a static, genetically predetermined organ over which humans had little if any control, got transformed overnight into a dynamic, ever-changing instrument whose structure and function we can control to a great extent,” he concluded.