The agency has also asked for details of transaction from the related banks that were used by the accused. 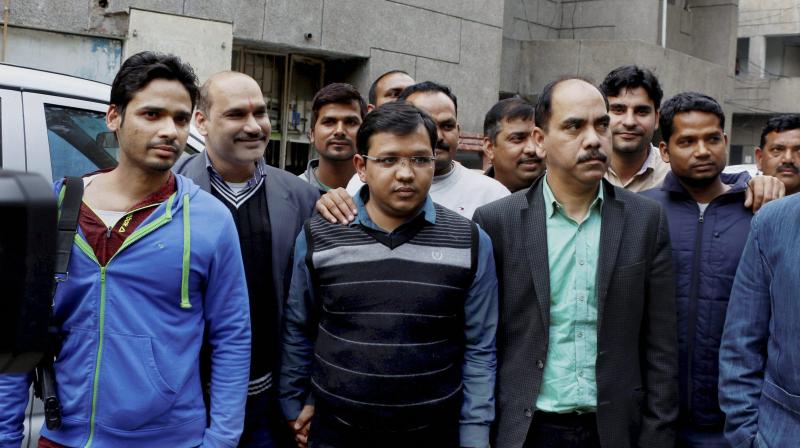 The two accused Anubhav Mittal and Sridhar Prasad, who were arrested by the Uttar Pradesh Special Task Force (STF) for an online trading scam worth over Rs. 3,700 crore in which around 6.5 lakh people were cheated, in Noida on Friday. (Photo: PTI)

The Enforcement Directorate (ED) on Sunday conducted searches in various cities across Uttar Pradesh after it registered a money laundering case in Lucknow to probe the alleged Rs 3,700 crore ponzi scam, operated by Anubhav Mittal's company.

The Uttar Pradesh STF earlier on February 2 arrested Anubhav Mittal, along with his company's CEO Sridhar and technical head Mahesh.

The searches that were conducted by the Enforcement Directorate resulted in recovery of incriminating documents revealing the offence of money laundering and possession of huge sum of money.

The documents recovered are likely to be useful in recovery of cheated funds as well as properties acquired out of proceeds of crime beyond the frozen amount of Rs 500 crore balance in the accounts of the company.

The agency has also asked for details of transaction from the related banks which were used by the accused.

The money trail would be investigated to further ascertain the investments and parking of the tainted money by the accused.

The directorate will seek custodial investigation of the accused arrested by the STF and their accomplices.

Further to secure the investments of the public provisional attachment of all moveable and immoveable properties which are proceeds of crime or acquired by means of tainted money will be attached under Section 5 of the Prevention of Money Laundering Act, 2002.

The directorate is also coordinating with the Income Tax Authority as well as STF in Uttar Pradesh.

The accused allegedly cheated about 6.5 million investors at an estimated Rs. 3,700 crore.

The investigators found incriminating documents that reveal assets worth crores of rupees.

The Enforcement Directorate's zonal office in Lucknow registered a criminal case under the Prevention of Money Laundering Act (PMLA) based on an FIR of the Uttar Pradesh Police's Special Task Force which unearthed the alleged illegal ponzi or multi-level marketing scam few days back.

According to the Enforcement Directorate, the accused propagated a false story that the promotional web pages linked to these international social media portals paid Rs. six per likes out of which they paid Rs. five to the investor. The agency said the accused also promoted four systematic investment plans offering various incentives depending upon the investment made by the user.

The agency added that all these firms were the brain child of Mittal and others.