Moily claimed Cong's victory in recent Rajasthan bypolls is a clear indication that the NDA govt is facing a lot of 'unpopularity'. 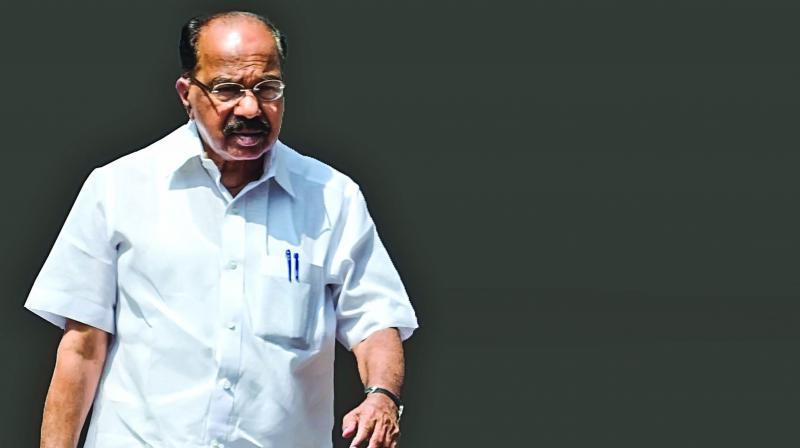 Moily claimed the Congress would get a majority in Rajasthan which goes to polls later this year and that the UPA would also form the government at the Centre after the Lok Sabha elections.

Hyderabad: Rahul Gandhi has emerged as "more than a match" to Prime Minister Narendra Modi and the aspiration of the party and youth is to see him as the country's PM, senior Congress leader M Veerappa Moily said in Hyderabad.

Asked about media reports suggesting that senior leaders like NCP chief Sharad Pawar and Trinamool Congress supremo Mamata Banerjee, both of whom were earlier in the Congress, maybe nursing an ambition to lead the UPA, he said, "Ambition is different, but the practical reality is another (matter)."

"The Congress has a pan-Indian person and identity," the former chief minister of Karnataka said, stressing that only a party having nationwide presence fits the bill to lead the opposition bloc against the BJP.

The former Union minister claimed the Congress' victory in the recent bypolls in Rajasthan is a clear indication that the NDA government is facing a lot of "unpopularity" and the "national-level graph" of the prime minister is "steeply coming down".

"The election 'jumla' (rhetoric) will not be trusted by the people. There is a total trust deficit. There is a lot of difference between what they (the BJP) assure and what they implement," Moily alleged.

He claimed the Congress would get a majority in Rajasthan which goes to polls later this year and that the UPA would also form the government at the Centre after the Lok Sabha elections.

Asked if Rahul Gandhi would be projected as the UPA's prime ministerial candidate, Moily said, "Yes, he is our Congress president, this is our aspiration...of the entire country...youth require it."

"Now, he is more than a match to Narendra Modi, he has emerged like that, as a strong personality," he said.

On the perception in some quarters that senior politicians like Sharad Pawar and Mamata Banerjee might be reluctant to work under Rahul Gandhi, he said, "these are localised conflicts".

He termed Sonia Gandhi - who recently stepped down as the Congress president but continues to be parliamentary party leader and UPA chairperson - as an "inspirational personality" for his party, the UPA allies and for the country.

"The Congress has never intended to impose its leadership on anybody (the UPA allies). It's a question of how you approach. There should be a pan-India personality of a political party, particularly to lead an alliance against the communal party like the BJP, you require a credible and pan-Indian personality...party," he said.

On suggestions that the Congress lost out in the recent Gujarat Assembly elections as it did not project a chief ministerial candidate, Moily said it may be one of the reasons but it's not the sole one.

The Congress cannot have a uniform policy on projecting a leader for the post of chief minister as it depends on the situation and circumstances in the party as well as the states concerned, he said.

"From state to state, this will change. State to state things will differ. And we cannot have a uniform policy (in different states) or approach to name the leader for chief ministership," Moily added.