India   All India  06 Feb 2018  We are sensitive to special status demand by Andhra MPs: Govt
India, All India

We are sensitive to special status demand by Andhra MPs: Govt

TDP MPs have were protesting in the Lok Sabha over the Union Budget not offering any special benefits to Andhra Pradesh. 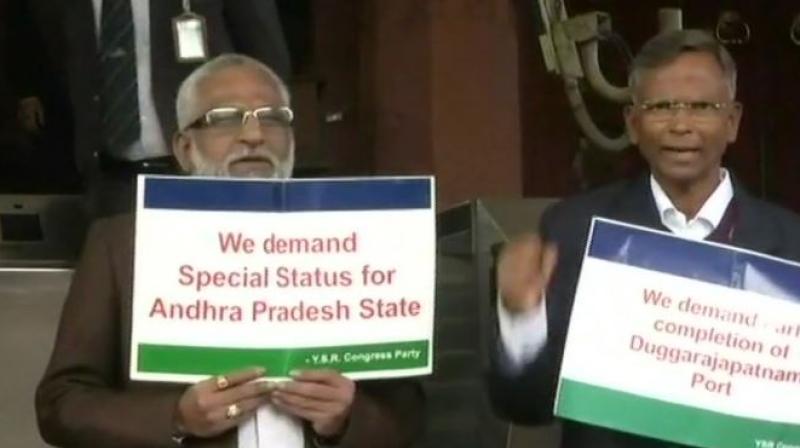 Earlier, as agitated MPs from Andhra Pradesh continued their protests during Question Hour, the proceedings were adjourned for ten minutes till 11:20 am. (Photo: ANI/Twitter)

New Delhi: Vociferous protests by members of NDA ally Telugu Desam Party on Tuesday forced brief adjournment of Lok Sabha proceedings even as the government termed their demands as "very sensitive" and gave an assurance that they would be looked into.

The YSR Congress also joined the protests in the Well of the House and raised slogans despite repeated requests by Speaker Sumitra Mahajan urging them to go back to their seats.

The ties between the TDP and ruling BJP are strained, with the former publicly expressing unhappiness over the Union Budget not offering any special benefits to Andhra Pradesh.

The MPs from Andhra Pradesh were demanding adequate allocation of funds and projects for the state.

"Their (MPs) demands are very sensitive. The Prime Minister and the government of India are sensitive about the development of Andhra Pradesh. Therefore, the matter they are raising will be looked into," Parliamentary Affairs Minister Ananth Kumar said.

The minister was requesting the agitating MPs to allow discussion on the motion of thanks on the President's address.

Earlier, as agitated MPs from Andhra Pradesh continued their protests during Question Hour, the proceedings were adjourned for ten minutes till 11:20 am.

"Please go to your seats. This is not the way," Mahajan was heard saying before adjourning the House for ten minutes.

There were around 10 members from TDP and YSR Congress in the Well.

In a novel protest, one of the members had tied a tuft of his hair with a red ribbon.

Soon after proceedings began at 1120 hours, Parliamentary Affairs Minister Ananth Kumar was seen talking to some of the protesting members.

Many members in the Well were holding placards with slogans such as 'Save AP Save Democracy', 'Follow Alliance Dharma Now' and 'We demand Special Status for AP state'.

Earlier this week, the TDP vowed to continue to press the Centre for various allocations to Andhra Pradesh.

After Question Hour also, Mahajan asked the protesting members to go back to their seats but in vain and also termed their behaviour as "unruly".