The Congress party has been planning to pitch for a national farm loan waiver policy in the forthcoming general election. 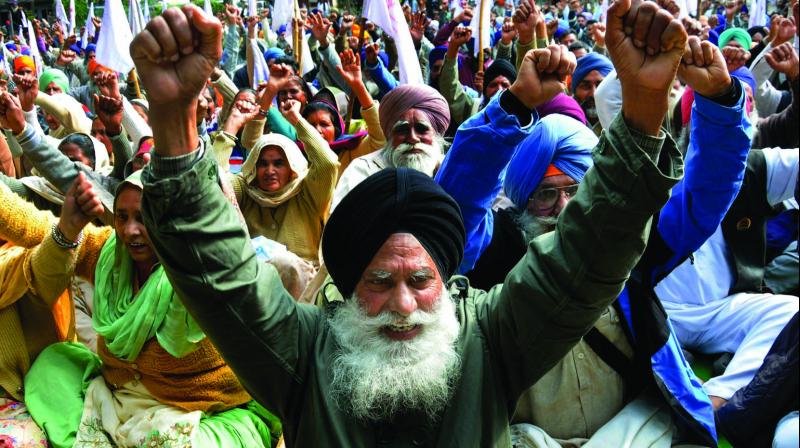 Farmers under the banner of All India Kisan Sangharsh Coordination Committee raise slogans during a protest against government policies including low milk procurement rates and loan waiver in Amritsar on Tuesday. (Photo: PTI)

With the next general elections in India just a few months away, populism is raining at both the central and the state level (particularly in the opposition-ruled states). There is nothing wrong with populism as long as it remains confined to promises, announcements, assurances and commitments. Only when political parties start acting on those that it tends to become counterproductive.

So, when the Congress-led governments in Chhattisgarh, Madhya Pradesh and Rajasthan started acting on their pre-poll promise of farm loan waivers soon after coming to power in the recent Assembly elections, the Opposition cried foul. Waiving off farm loans by itself is not a solution to the farm distress being experienced due to years of neglect of agriculture for two reasons: one, it does not disproportionately benefit small and marginal farmers – the intended beneficiaries – many of whom borrow from sources other than the formal banking sector; two, it has to be a part of a comprehensive package of measures designed to address agrarian crisis so that a need for another farm loan waiver doesn’t arise in future. PM Modi is right in saying that the solution is to empower the farmers, to give them all facilities from securing farm inputs to helping them connect with markets.

The Congress party has been planning to pitch for a national farm loan waiver policy in the forthcoming general election. Imagine the potential setback that such a populist move could wreak on the public finances and thereby on the development process of the country, if it is acted upon.

A populist move by one political party elicits grander populism by another. As if to counter the farm loan waiver by the Congress, the BJP-led government at the Centre announced and secured the legislative approval of 10 per cent reservations in government jobs and all educational institutions for the economically weak population in the general category. The Opposition cried foul as they see no reason for such reservations in a growing economy in which “a rising tide would lift all boats.”

This is not all. Populism has just gotten amplified with the announcement of several new welfare measures and sops in the recent Budget that is supposed to be an “interim” Budget.

How to check populism

If you think that one party is being more populist than the other, you are mistaken. The rules of the game are such that populism will happen, regardless of the party and personality in power. Is it not possible to check populism in the period immediately preceding elections? Yes, it is possible, provided rules are defined to discipline the parties. In politics, you can’t expect any political party to self-regulate. The only way to regulate populist behaviours is if all political parties mutually agree to abide by certain common rules that are externally enforced in a non-partisan manner.

In the context of farm loan waiver, Raghuram Rajan, former governor of the Reserve Bank of India, suggested taking farm loan waiver off the election manifestos of all political parties. He is reported to have written to the Election Commission on this issue. In fact, what is needed is a systematic approach that is applicable to all populist measures and not just to farm loan waiver. For this, there is a need to (a) define criteria to suggest whether or not any particular policy/program would qualify as a populist move and (b) reach an understanding on how much in advance of elections will the “no populism” rule kick in. This idea merits a serious discussion and debate among political parties if we are to make refinements in the way the political parties conduct themselves. But this is not all.

How to promote longer-term development

Another area that merits a serious discussion is in promoting longer-term development of the country. Gone are the days when the development was mostly about building infrastructure such as dams, roads, bridges, airports etc. that can be built within a single term of a party in power. While this kind of development is still required, development has increasingly become a complex affair, requiring longer-term perspective and policies. For example, implementing policies in education or health sectors require a sustained effort over a longer-term period as it has to be grounded in social processes for better implementation and local oversight. Further, the private sector that has an important role to play in the development process of the country, needs a stable and predictable policy environment. The same is true of public-private partnerships. For such partnerships to flourish, there ought to be longer-term understanding and agreements.

A solution to achieving a longer-term development lies in defining a code of conduct for successive governments to ensure continuity of policies and programmes. Such a code is also needed between the Centre and states to ensure a responsible behaviour from each side on the Centr-ally-sponsored schemes (CSSs) that are an important instrument for development. This will also prevent situations like states moving in and out of CSSs at will or lacking seriousness in implementing them.

To check populism and to promote longer-term development, India has some plumbing to do that will discipline all political parties. This plumbing is necessary for India to realise its development ambitions and to also take pride in its political maturity.