Trust set up for Ram Temple

UP govt allots 5 acres for mosque 25 km away from temple. 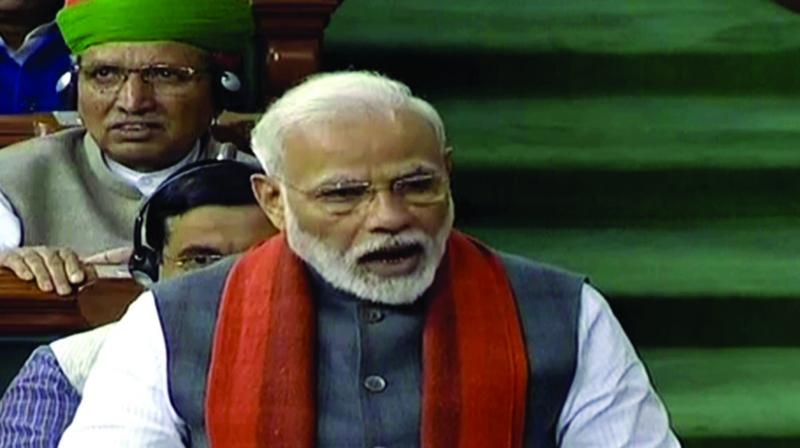 New Delhi: The Centre on Wednesday announced the setting up of a 15-member trust to oversee the construction of a “grand and magnificent” Ram temple in Ayodhya, an announcement made by Prime Minister Narendra Modi in the Lok Sabha four days before the expiry of a three-month deadline set by the Supreme Court.

The announcement of the “broad scheme” for building a Ram temple and formation of the Shri Ram Janambhoomi Teertha Kshetra Trust was made by the Prime Minister shortly after a meeting of the Union Cabinet presided by him gave its approval.

Union home minister Amit Shah said the trust would comprise 15 members, including a dalit representative, who would be in-charge of the entire 67-acre land.

Mr Modi said formation of the trust was as per directions of the Supreme Court and the Union Cabinet has decided to transfer 67.703 acre land to it for the construction of temple. The Uttar Pradesh government also allocated 5 acres land to Sunni Waqf Board that the All India Muslim Personal Law Board has rejected.

Land for a mosque has been assigned about 25 km from the Ayodhya temple complex and even outside the town, but within the Ayodhya district.

The land is in village Dhanipur in Ayodhya, on the Lucknow highway, around 18 km from the district headquarters, said UP minister Srikant Sharma.

Reports said the spot chosen by the Yogi Adityanath government is located outside the “14 kosi parikrama”, or an area of some 42 km around Ayodhya town that devotees circle during religious events. Saints had reportedly asked that the mosque site be assigned beyond the parikrama boundaries.

The Prime Minister’s announcement, that was promptly followed by a gazette notification, comes at a time when Model Code of Conduct is in place in Delhi which is all set to go for Assembly polls on Saturday where the Bharatiya Janta Party (BJP) is trying hard to wrest power from incumbent Aam Admi Party.

However, the Election Commission of India (ECI) said that no permission was required from it to make this announcement and this was not a violation of MCC. “No permission was sought from ECI and it was not required to be sought since it is Supreme Court mandated action,” said an official of the ECI.

Union minister for information & broadcasting Prakash Javadekar tried to delink the announcement with Delhi elections saying, “This is the decision taken for a temple in Ayodhya. Nothing to do with Delhi. The whole country is not under elections. Let us not confuse the situation.”

However, AIMIM MP Asaduddin Owaisi questioned the timing of the PM’s announcement saying the BJP makes all major announcements keeping in mind polls, and for the Delhi Assembly elections the BJP has played its last card. He added that the session of Parliament is to end on February 11 and the announcement could have come after February 8. “Seems like BJP is worried over Delhi Elections,” he said.

“On the basis of the Supreme Court direction, my government has today given approval to proposal for creation of Shri Ram Janma Bhoomi Tirtha Kshetra Trust. The trust will be free to take all decisions regarding creation of a magnificent RamTemple in Ayodhya,” the PM said in Lok Sabha amidst thumping of tables and chanting of “Jai Shri Ram” by the Treasury benches and silence from Opposition.

PM said that on the directions of the Supreme Court, the government had requested Uttar Pradesh government to allocate 5 acres of land to the Sunni Waqf Board, and the state government acceded to the request. PM also praised the “maturity shown by the country in maintaining peace and harmony” following the Supreme Court’s decision on the Ayodhya issue.

“Keeping in mind the construction of the magnificent Ram Temple and the spirit of the devotees who would come to pay obeisance to Ram Lalla, in future the government has taken another important decision. It has decided that whole of the approx 67.703 acre acquired land will be transferred to thus created Sri Ram Janma Bhoomi Tirtha Kshetra trust”, PM added.

Soon after the PM’s announcement, UP Cabinet announced allotment of 5 acres of land to Sunni Waqf Board.

The All India Muslim Personal Law Board (AIMPLB) said the Sunni Waqf Board, which will get 5 acres of land in Ayodhya for the construction of a mosque, is not the representative of the entire Muslim community and if it accepts the Centre’s offer it should not be considered a decision of all Muslims of the country.

“Sunni Waqf board is not representative of entire Muslim community. If it takes land, it should not be considered decision of Muslims of the country,” senior executive member of AIMPLB Maulana Yasin Usmani said. He said AIMPLB and those associated with it have decided that they “will not take any land in Ayodhya”.

Giving out details of the trust, Mr Shah said that the trust will be completely free to take every decision related to the temple. The trust will have its office in Delhi’s Greater Kailash.

“I am confident that millions of people who were waiting for centuries will soon be able to see the grand temple of Lord Shri Ram at his birthplace”, Mr Shah said.

Congress ally in Maharashtra, Shiv Sena MP Sanjay Raut welcomed the announcement saying, “You all know, decision of building the Ram Temple was given by the Supreme Court and to respect its decision is the responsibility of the government.”