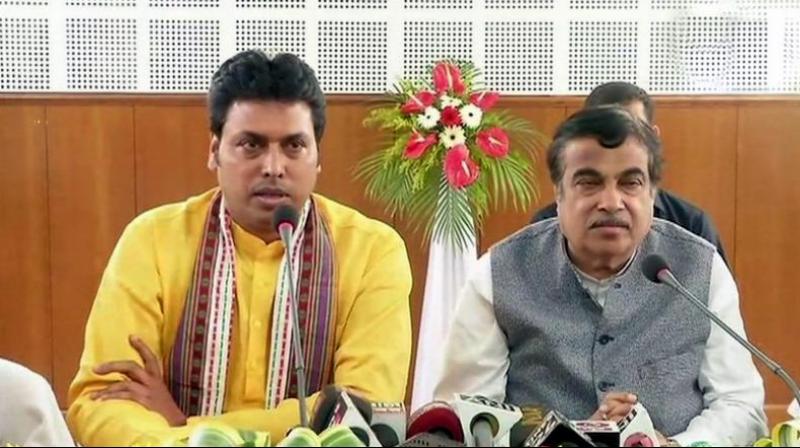 After the announcement, Biplab Kumar Deb (L) said, 'Jishnu Deb Burman will work with me as the deputy CM of Tripura.' (Photo: Twitter | ANI)

Agartala: Biplab Kumar Deb, a young BJP leader with a background in the Rashtriya Swayamsevak Sangh (RSS), has been named as the chief minister of Tripura.

Union Minister Nitin Gadkari on Tuesday made the announcement and said, "Biplab Kumar Deb to be the chief ministerial candidate for Tripura."

Jishnu Deb Burman has been named as the deputy CM of Tripura.

After the announcement, Biplab Kumar Deb said, "Jishnu Deb Burman will work with me as the deputy CM of Tripura."

The new government will be sworn in on Thursday (March 8) in Tripura, where the Bharatiya Janata Party-led alliance defeated the Communist Party of India (Marxist) government, which was in power in the northeastern state for 25 years.

Read also: Tripura govt to be sworn in on March 8, BJP-IPFT begin talks to pick CM

BJP and its alliance partner Indigenous People's Front of Tripura, or IPFT have won 43 of Tripura's 60 assembly seats.

The BJP, which had launched a shrill campaign to seek "poriborton" (change), got 35 seats and a 43 per cent vote share.

Kerala is the only state now governed by Left parties.